The Best Time to Visit Hanoi and Halong Bay

Although Hanoi and Halong are beautiful all year round, many travelers must wonder when these two destinations are most worth-visiting throughout the year. For a better understanding, this travel guide will help you to choose the best time to visit Hanoi and Halong Bay.

Hanoi and Halong Bay are two famous tourist destinations in the North of Vietnam. Possessing charming beauty and interesting culture, both are among the must-visit destinations that you should not miss in your life.

Come here once to discover the ancient beauty in Hanoi as well as the pristine landscapes in Halong Bay. It goes without saying that Ha Long is a famous bay recognized by UNESCO as a world natural heritage and one of the 7 new natural wonders of the world. Meanwhile, Hanoi is an appealing capital city known for its over-1000-year-old history, unique culture, and fine cuisine.

Choose the best time to go on a Hanoi - Halong trip

The Weather in Hanoi and Halong Bay

Both located in the tropical climate region, Hanoi and Halong Bay feature a typical kind of humid monsoon weather.

From November to April, the dry season is affected by the northeast monsoon giving cool temperatures of 15 – 20°C on average. During these months, the rainfall is as low as a monthly average of 40 mm in each destination, with the highest precipitation in April.

The sun shines moderately and not too harshly to cause sunburn. Despite the dryness, the breezy weather is so comfortable that you can join plenty of outdoor activities in Hanoi and Halong. 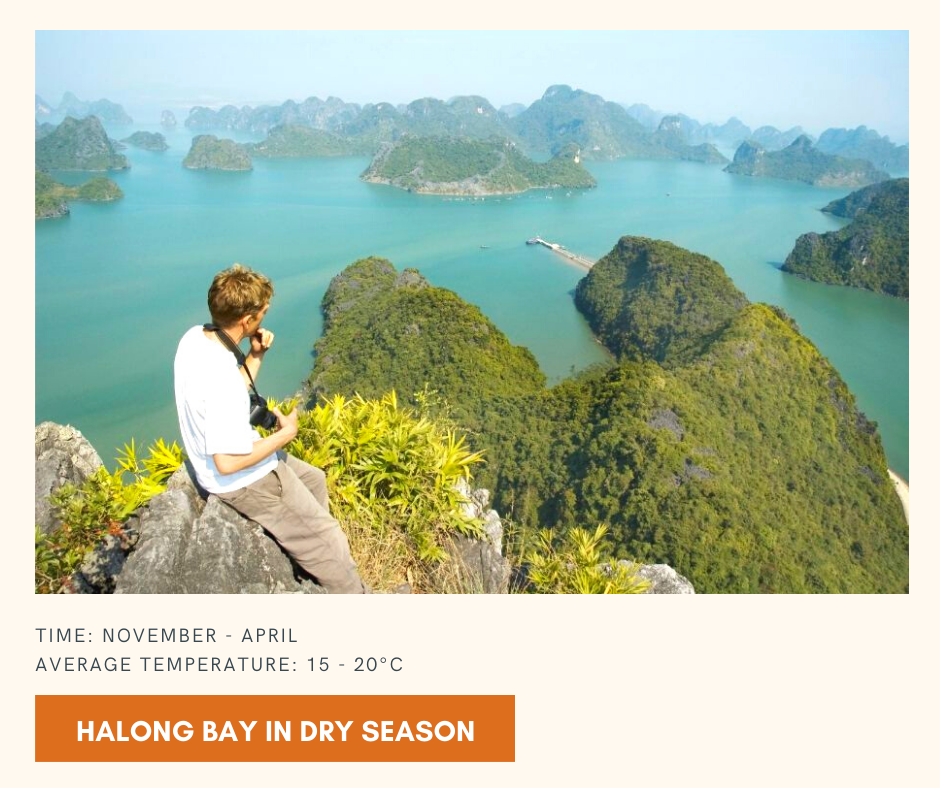 From May to October, the weather in Hanoi and Ha Long experiences the wet season influenced by the southwest monsoon. It is extremely hot with high temperatures fluctuating around the mid-30s°C with a high UV index.

July and August are not only the hottest but also the wettest months which receive frequent heavy rains and occasional thunderstorms. If you travel to Hanoi and Ha Long during the wet season, check the weather forecast to avoid predictable storms in a few days. 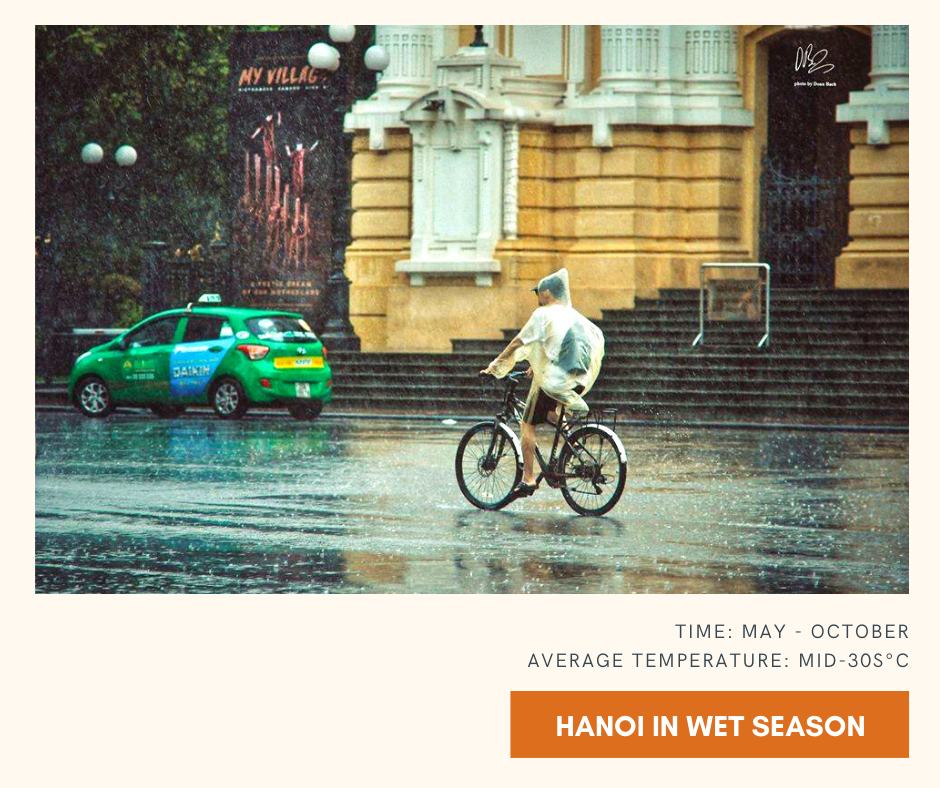 Visit Hanoi and Halong Bay in the wet season

In other respects, Hanoi and Ha Long Bay weather can be divided into four distinctive seasons: Spring (Feb – Apr), Summer (May – Jul), Autumn (Aug – Oct), and Winter (Nov – Jan). The average temperatures and rainfall vary greatly throughout the year. Typically, the hottest months (32 – 35°C) range from June to August while the coldest months (9 - 14°C) fall between December and February.

Each season features its own characteristics which make a considerable impact on the perfect time to travel. Before planning a trip to Hanoi – Halong, travelers should take time to check the weather carefully to get an insight into the best time of the year to travel to Hanoi and Ha Long altogether.

You may also like Halong Bay Weather & Temperature: Ultimate Guide

The Best Time to Visit Hanoi and Halong Bay

It is the ideal time when Hanoi and Ha Long Bay weather is really cool and pleasant. The average temperatures vary between 18 and 28°C; the rainfall drops significantly, compared to other times throughout the year. 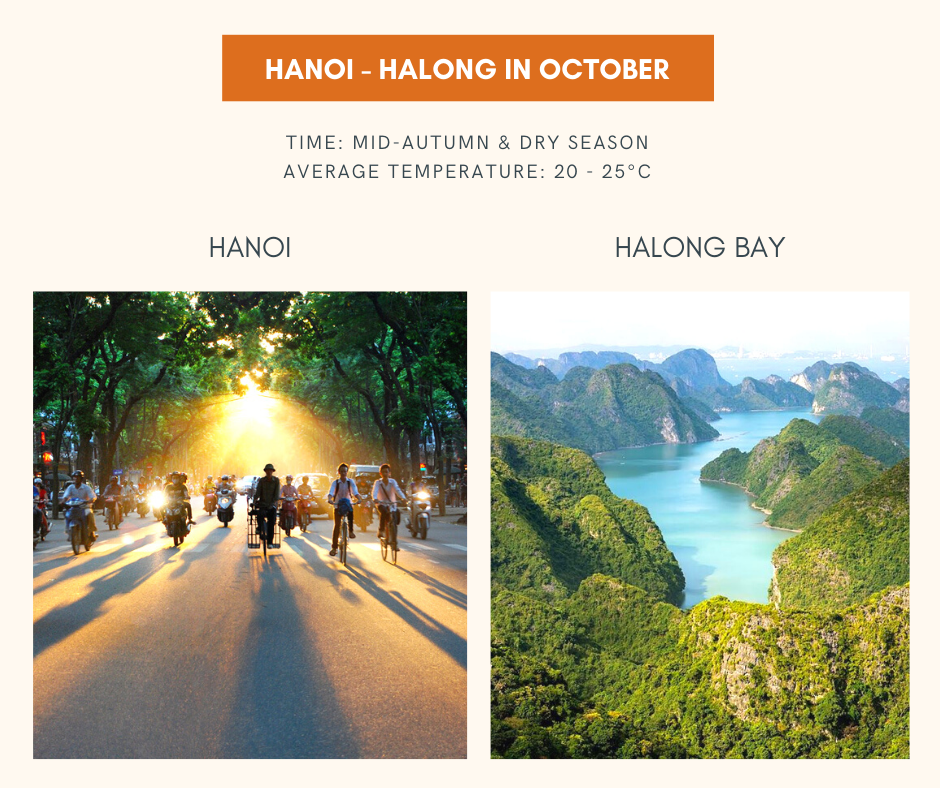 October - The best month to visit Hanoi and Halong Bay

Thanks to the beautiful weather, either Hanoi or Halong is a feast for the eyes in dry months. Especially, October is believed to be the best month to visit Hanoi and Halong Bay as the mid-autumn reaches the peak of its beauty. 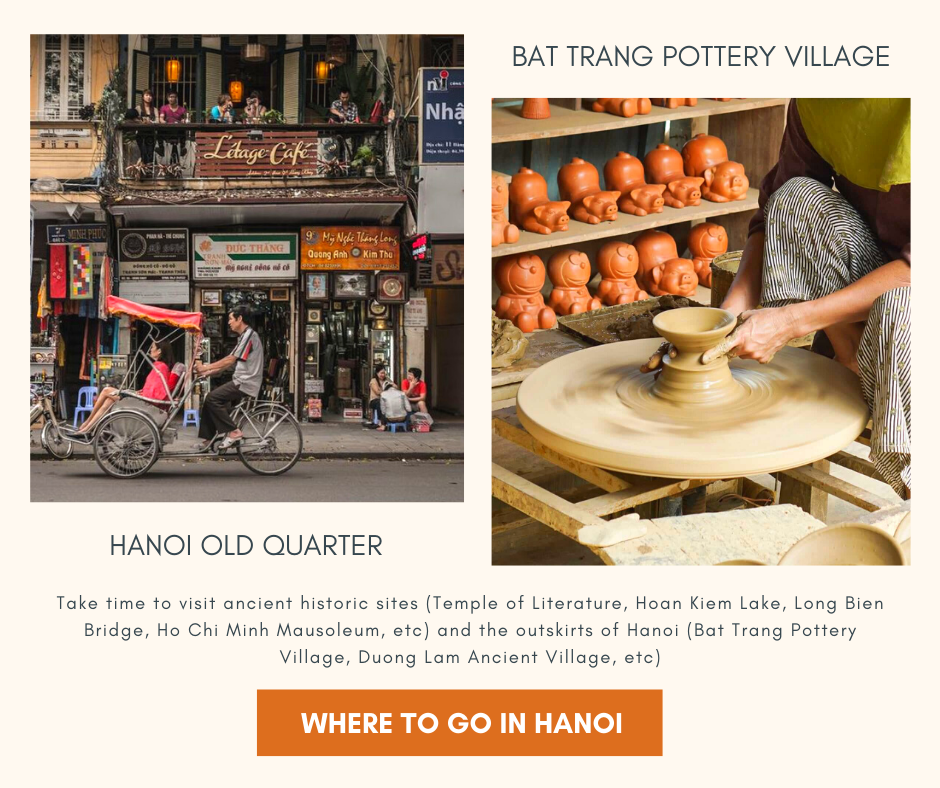 Places to visit in Hanoi for great weather 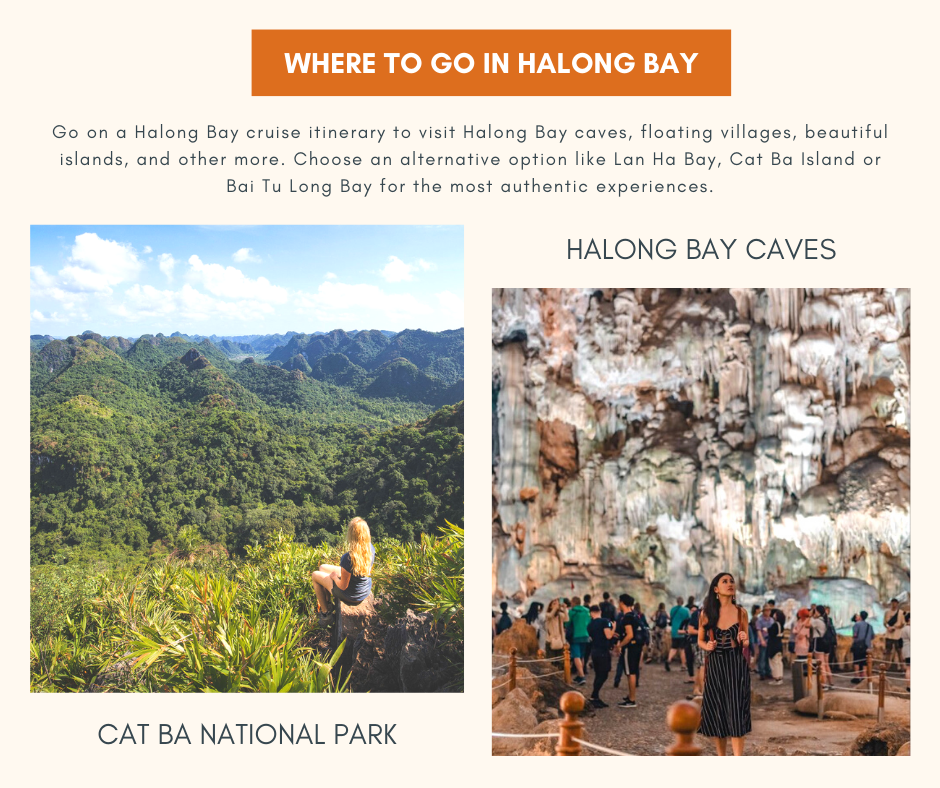 Places to visit in Halong Bay for great weather

Thanks to the clear division of weather, Ha Long is also an attractive tourist destination for tourists at any time of the year. With regard to weather, Ha Long Bay is best visited from March – April as well as September – November.

It's the most delightful time of the year to join various outdoor activities like kayaking, trekking, BBQ lunch, cruising, etc. During these months, Halong Bay weather is expected to be calm without harsh sunshine and heavy thunderstorm. There are more breezy days and hazy sunshine over the bay. 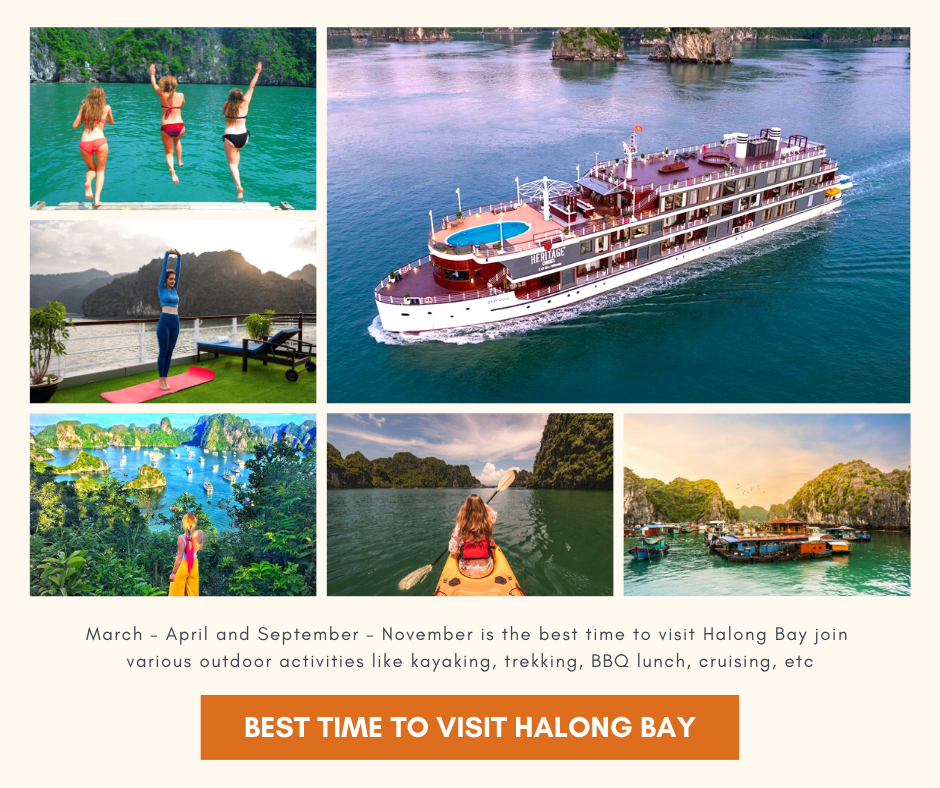 If you don’t mind the heat, it is possible to visit Halong in the summertime, from May to August. For domestic tourists, it is also the ideal time to travel to Halong Bay on a summer vacation to the beach.

As far as mentioned above, the months from late June to August receive the highest temperatures and the largest rainfall throughout the year. The crystal blue sky and moderate sunshine create favorable conditions to enjoy the beach relaxation and engage in plenty of water-based activities.

However, you should check the weather forecast frequently as June - July is in the rainy season in northern Vietnam. According to nature, June - July is the month when a lot of storms hit the Gulf of Tonkin and Halong, so be careful when traveling to Halong during this time.

All things considered, the best time to visit Halong Bay is as early as March - April or as late as September - November.

The best time to visit Hanoi

Overall, spring (February – April) is considered a perfect time to travel to Hanoi, when the New Year has marked the new beginnings of natural landscapes. In summer (May – July), Hanoi weather is quite hot with an average temperature of around 30 degrees Celsius.

However, the overheating will be soothed by the heavy showers in late summer and early autumn in Hanoi. Autumn (October – November) is also a great time to admire the beauty of Hanoi. It’s time when Hanoi weather is cooler and starting to get cold. By winter, the average daily temperature in Hanoi is lower, approximately 18 degrees C. If the Western cold really bothers you, try experiencing the chilly weather during Hanoi winter.

The period from October to April is considered the best time to visit Hanoi. In this season, the rainfall in Hanoi has declined, the sky is clearer and the temperature is pretty cool. All characteristics create the best conditions for you to explore any street corners in Hanoi. 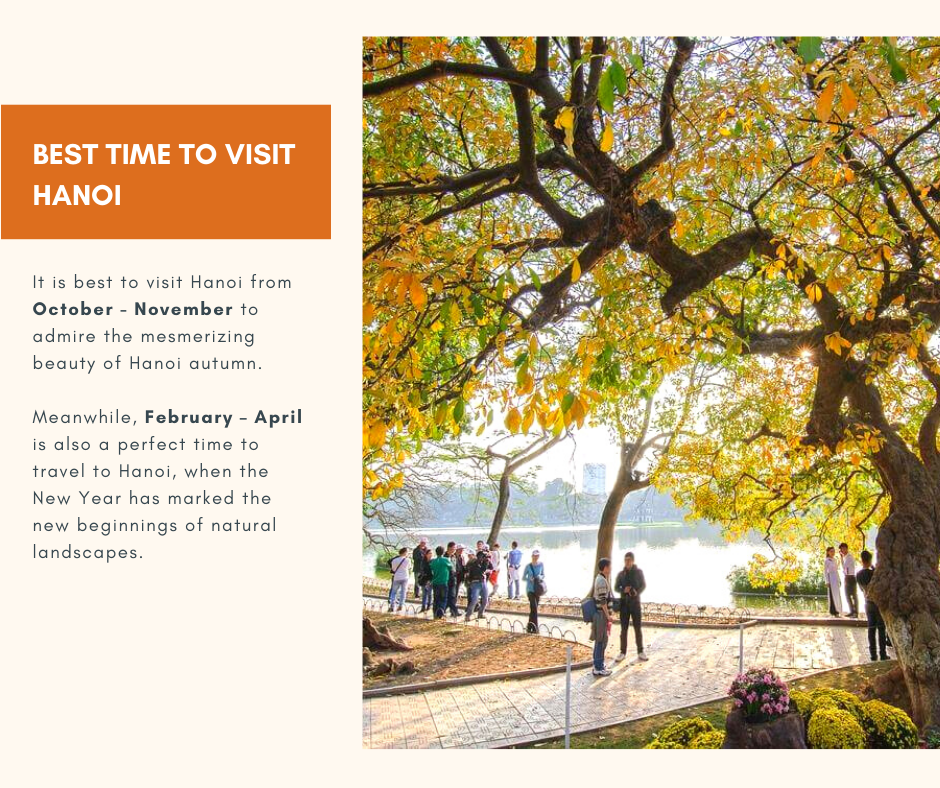 October - April is the best time to visit Hanoi

You can also schedule trips in the spring such as February, March, and April. At this time, the weather is warmer, without heavy rains; drizzle rains happen occasionally and do not affect your trip considerably.

If you are keen on the cold in Hanoi, you can travel between December and January. Around this time, you can go on a street food tour and sample appetizing specialties that perfectly fit Hanoi's winter.

As mentioned before, autumn and spring are not only the best time to visit Hanoi and Halong Bay for great weather but also the busiest time of the tourist season. If you can’t stand the hustle and bustle, this time is not for you. Not to mention, the bloom of visitors coming to Hanoi and Halong has led to an increase in the price range along with a downgrade in the quality of services.

Following is a tip for those who opt for the best time to travel to Hanoi and Ha Long Bay on a budget. Annually, the low tourist season falls between May and September, when you better hunt for an abundance of hot deals and promotional codes for a Hanoi – Halong tour. 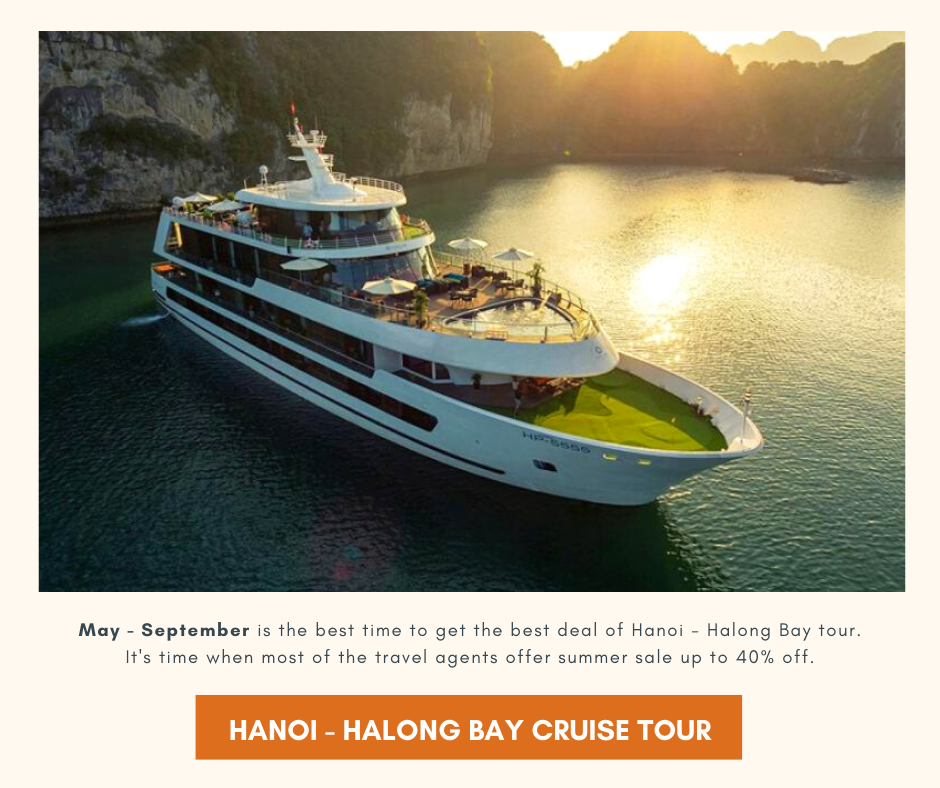 Sometimes, you can save half of your budget since there is plenty of sales 40% - 50% off out there. You should follow up on the updates and check price quotations of the Halong Bay cruise from Hanoi to find the best deal.

During these months, Hanoi and Ha Long welcome a moderate number of tourists despite the hot summer and the chance of a thunderstorm. Don’t take the climate conditions into account because the weather is not too fierce to screw up your whole trip. There are so many things on the bucket list to do in Hanoi and Halong in case of bad weather.

If you still have no idea, this article on “What Should You Do If Halong Cruise Is Canceled?” may help you out. 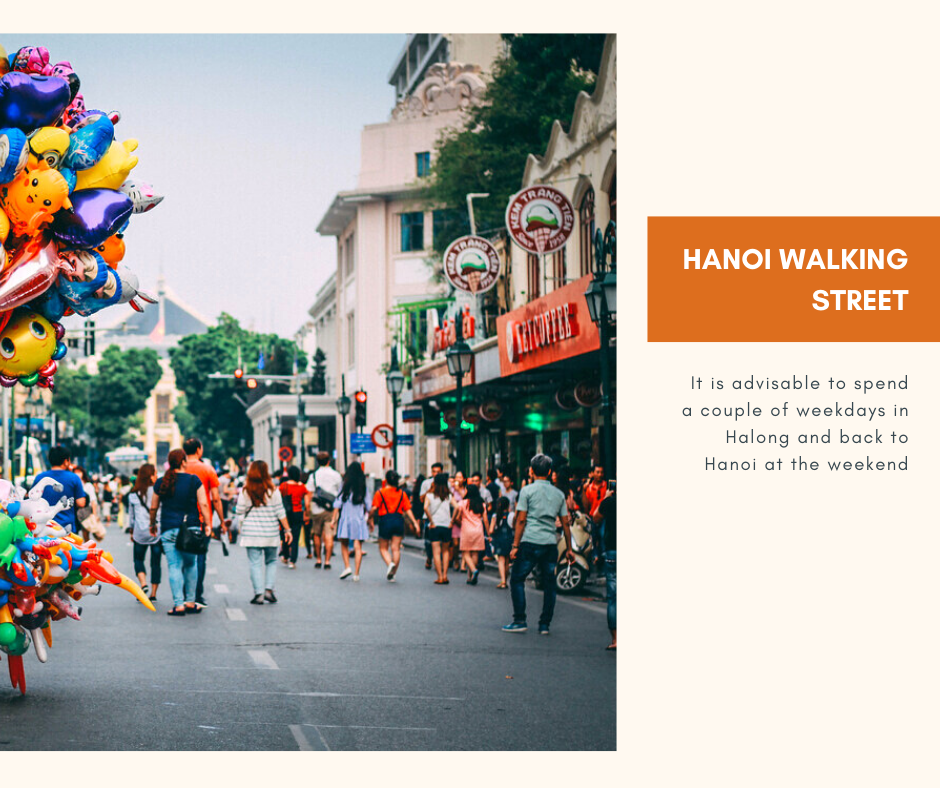 When to visit Hanoi and Halong together

To sum up, any time of the year can be a great time to visit Hanoi and Halong Bay. When March – April and October – November is the best time to enjoy the pleasant weather, May – September can be desirable to get the best deal Hanoi to Halong Bay tour.

Before planning a trip, let’s check the availability of our tour package at BestPrice Travel and follow our updates on the weather forecast so as to decide when to visit Hanoi and Halong Bay.