Vietnam is really famous for its huge Karst topography system with Halong Bay, Phong Nha - Ke Bang National Park, or Son Doong cave - the biggest limestone cave in the world. However, there are so many other smaller but so beautiful caves that you might not know before. Trung Trang cave on Cat Ba island is a good example.

In the Cat Ba archipelago, the limestone cave system is huge, there are totally more than 150 caves in different shapes and sizes. Trung Trang Cave is located in Trung Trang valley, about 1km from the center of Cat Ba National Park and 15km to the northwest of Cat Ba town. Trung Trang is known as one of the typical and largest caves for the cave complex in Cat Ba Biosphere Reserve. The entrance ticket of Trung Trang cave is 80.000VND or around 3.5USD. 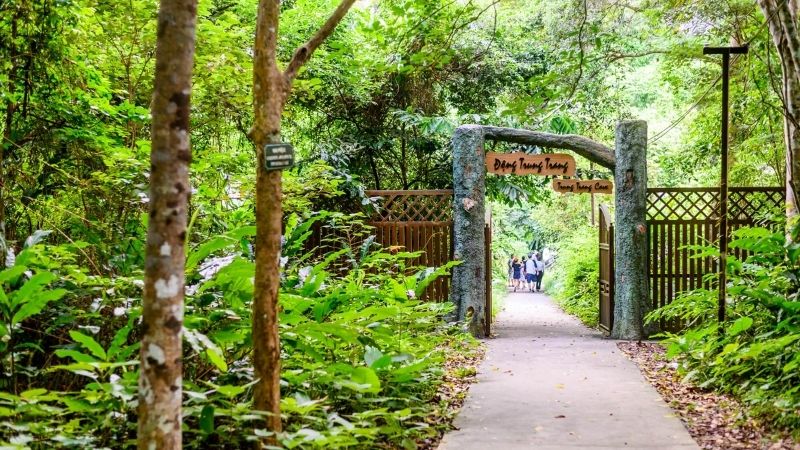 Found in 1938, Trung Trang Cave is called by many different names. In the past, it was called the bat cave because inside the cave was home to many herds of bats. Together with some other caves in Cat Ba island, the archaeologists have found in Trung Trang cave some fossilized samples of ancient people from around 6000 years ago. During the defendant war against the US invasion, from 1964 to 1968, the cave was selected as the location of the naval command with the task of telecommunication and radio station, so the cave used to be called Navy cave. Currently inside the cave still preserves a few traces such as entertainment room, meeting room, water tank ... to serve daily life for our soldiers.

Trung Trang cave was formed tens of millions of years ago, when water flowed through the hollow, eroding limestone mountains. Trung Trang cave has a length of about 300m through the heart of the mountain. It has thousands of stalactites with numerous various shapes. Entering the cave entrance, visitors will immediately see the image of a young woman nestled on a cliff. On the cave door, visitors also come across the image of a Python which is said to be the mascot given to guard the cave by Trung Trang’s princess. Keep going around 100m into the cave, you will arrive at a compartment with stalactites glittering under the dim light. There are stalactites with different shapes such as a crown, a strip of brocade, and then 3 Phuc Loc Tho - the 3 deities in Vietnamese belief who are blessed for luck, prosperity, and longevity … Local people call this cave “gold treasure” or “princess’s treasure”. Trung Trang cave has an ecosystem in mysterious darkness, home to many species of creatures such as bats, birds, insects, and reptiles. The lighting system is very limited to preserve the characteristics of the ecological environment in the cave.

End of the journey to discover more than 300 m. Trung Trang cave is the creeper door with many shapes as the great sculptures of creativity. From here, visitors will step into a green space with thousands of trees and vines of Cat Ba Biosphere Reserve.

If you start from Hanoi and have no personal transportation, the easiest way is to take a bus from Hanoi to Cat Ba and sleep until someone wakes you up and says that you’ve arrived. But if you want to go there by yourself, there are 3 ways to come to Trung Trang cave, two from Hai Phong city and another from Halong Bay.

Once you get on the island, you can catch a taxi or rent a bike, Trung Trang cave is around 15km to the Northwest of Cat Ba town. It’s very easy to go to Trung Trang cave as the transportation infrastructure here is really easy and simple with one main road run through the island. Trust me, with google maps, it’s nearly impossible to get lost in Cat Ba.

Trung Trang cave represents more than 150 large and small caves on the Cat Ba National Park. Here the fossil bones, stone tools of the ancient Vietnamese. This is also the place to save the heroic history of the army and people on the island. And if you have a chance to visit Vietnam, Cat Ba island is a destination you should not miss.