Halong Bay is famous for its beautiful caves that attract tons of tourists every year. Perhaps, the most legendary dry cave with a uniquely breathtaking pathway is Thien Cung cave.

Thien Cung Cave also knows as heavenly palace cave is the most beautiful primitive cave in Ha Long Bay and the longest dry cave in Asia. The cave is located in the Southwest of Halong Bay, about 4km away from Dau Go Island. With complex interior structure, multi floors with high ceiling, Thien Cung Cave has become a worldwide tourist attraction for such a magnificent system of stalactites and stalagmites. 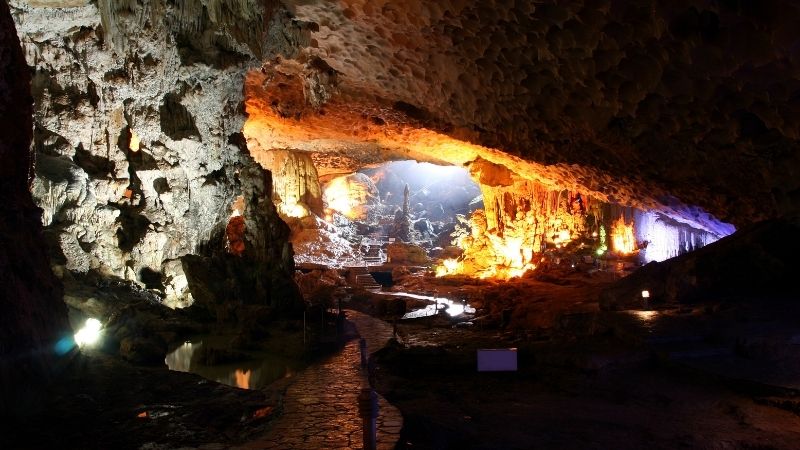 Why is it called Thien Cung Cave?

There are various-sized sculptures with strange shapes of birds, fishes, celestial maidens dancing, etc. created by Mother Nature. The locals believe the cave has such natural beauty thanks to the legend about an ancient Dragon King, who defeated invaders and returned to his cave, refusing to be awarded. Afterward, Dragon Prince married to a girl named May. The wedding took place inside the cave with the visit of many dragons, huge pythons, and giant eagles. Wandering around the Northside, you can see the scene engraved here and there on the wall and stones. You would not need outstanding imagination to see the engraved images indeed. Therefore, this cave is named Thien Cung Cave (means “Heaven Palace” in Vietnamese).

Exploring the craggy cliffs is definitely no easy journey with many great scenes to stop for a look at. Behind a narrow door is a tremendously large space, in which the further you reach, the more fascinated you will be. In the center lied a natural stone curtain, which is created by a cluster of stalactites hanging down and placed under the arch of the cave. The last area is filled with colored lights, creating magnificent shots. The legend tells that this is where the Dragon Price and his wife gave birth to 100 children, who split to explore new areas of Vietnam, forging pathways and form new villages with their mother while and the other half continue to guard the Bay. These children are told to be Vietnamese ancient origin. Leaving the cave, an impressive vantage point that overlooks the whole Bay is waiting for you to be amazed. A short trek will take you back down a set of stairs and return to your cruise, ending the great journey with your heart left behind.

Get yourself to this amazing Heavenly Palace Cave from April to August for the best dry time. There are many tour cruises which offer tourists a full serviced journey comfortably. You can look for Ha Long Bay Cruise as a preferred option 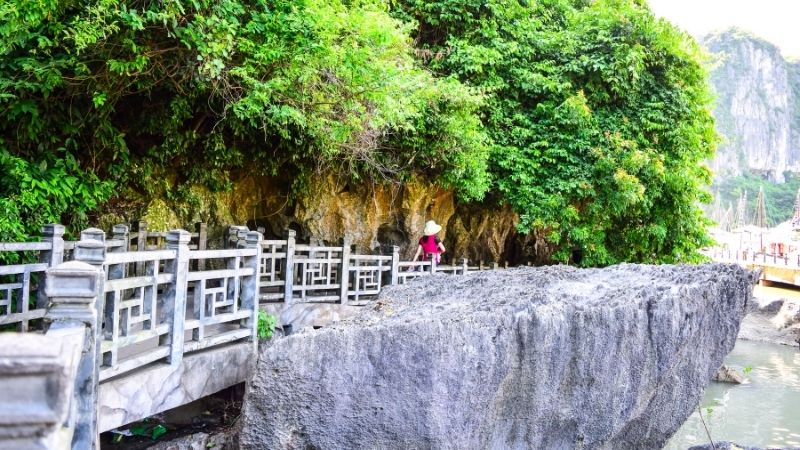 How to get to Thien Cung Cave

Due to the location on the bay and quite far from the shore, the best way to visit is to rent a boat or buy a Halong Bay cruise tour. However, you should pay attention to buy tickets, choose the tour that has rouge 1, because not all sightseeing tours stop at Cave. To fully enjoy the beauty here, you should book a 2 - 3 days tour.

For the extreme travelers who’d prefer self-guidance, you need to go to Dong Hoi – Quang Binh (taking a bus or train from Ha Noi or fly ticket from other cities). Locals often rent a bike to transport to Thien Cung Cave for a low cost. However, tourists can book a taxi or private car at the bus/train station or the airport and go straight to the cave for convenience. If you can ride a bike, renting one might give you a more amazing nature view along the road.

Things to do at Thien Cung Cave

To reach entrance, you have to go through a road located on the cliff edge, both sides are covered with trees. The scene is beautiful and airy, creating a motivation for the upcoming discovery journey.

The deeper you go inside, the more you will be amazed at the vivid and magnificent beauty of stalactites: dragons hidden in the stalactite clouds, giant eagles spread their wings, the serpents curl around the ancient banyan tree, etc. The East of Thien Cung Cave is a huge picture created by nature with images of characters in ancient fairy tales. The northern cave will attract a lot of attention with the image of fairies dancing and singing. 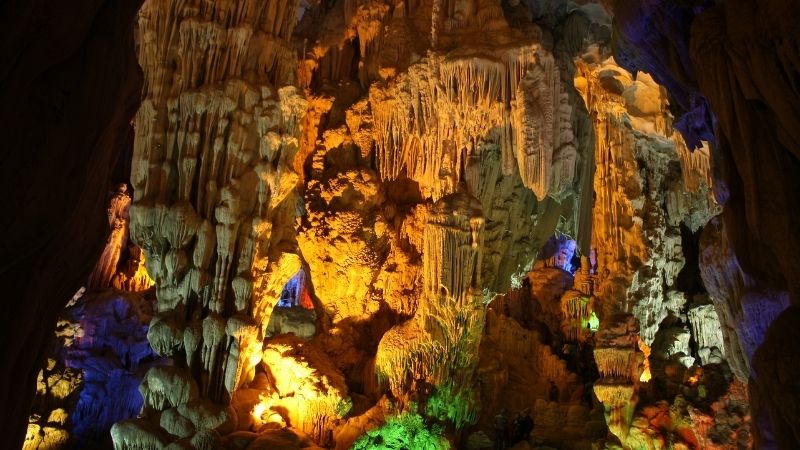 Coming to the center of the cave, we can admire the four huge pillars carved in unique shapes from the bottom to the top of the pillar, such as daily activities of people, birds, flowers etc. Not only scenery, but you also can hear the sound of wind blowing between rocks.