Phu Quoc attracts a lot of tourists coming to visit not only because of stunning beaches, high-end beach resorts, modern facilities, international dining venues but also historical and religious sites. Coming here, you can both enjoy the sunshine on the beach, enjoy the best food in the country, and learn more about Vietnam's religion and culture. There are many temples and pagodas in Phu Quoc that you can visit during your trip. Below are the top 8 famous ones that are worth a visit.

Ho Quoc Pagoda, also known as Truc Lam Ho Quoc, is the largest and most peaceful Buddhist temple on Phu Quoc Island. It is situated along the coastal 10-km road the north of Sao Beach. Ho Quoc pagoda was built in 2012 as a spiritual tourism project, following the architecture style of Ly - Tran Dynasties. The temple is beautifully carved with intricate details and has a stunning natural landscape.

Truc Lam Ho Quoc attracts a large number of tourists coming to visit each year. They come here to visit the main temple, burn incense, and pray under the giant Buddha statues inside. Besides, many can climb the dragon stairs to reach the top and enjoy the panoramic view of the mountains and sea. 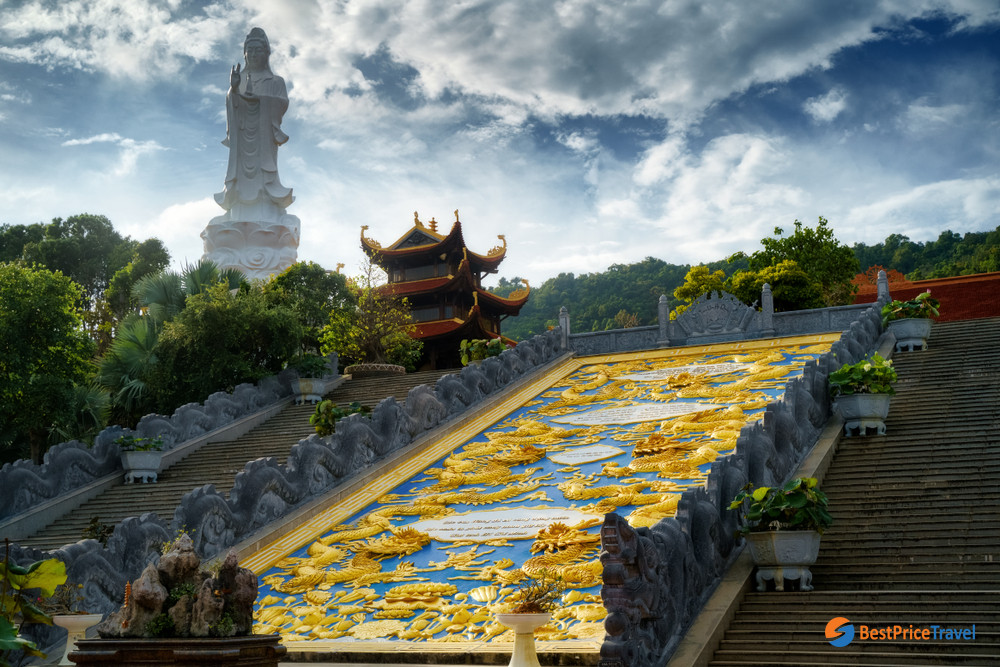 Dinh Cau Rock, also known as Cau Temple, is an odd-shaped natural formation in Phu Quoc Island. The temple was constructed in 1937 to commemorate Thien Hau (the goddess of the sea), who is believed to provide protection for fishermen.

The temple features a brightly colored lighthouse and Buddhist shrine, making it a popular photography spot among travelers. Visiting the temple, you will need to climb 29 winding stone steps to reach Cau Temple’s rooftop terrace, then you will be able to enjoy the views of Dinh Cau Beach, traditional fishing boats, Duong Dong Town, and neighboring islets. 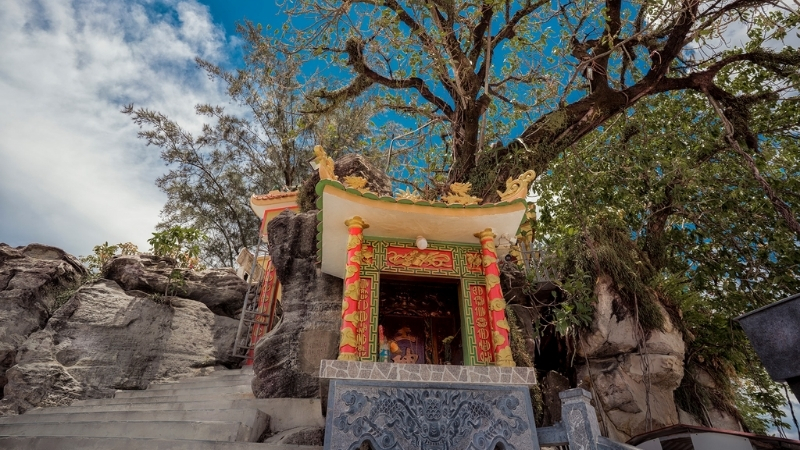 Sung Hung Pagoda is the oldest pagoda in Phu Quoc which was built in the early 10th century. The pagoda was merged from Sung Nghia and Hung Nhan Pagodas and has undergone two major restorations but most of its original architecture remains intact throughout the years.

The temple has a front courtyard featuring plenty of Bodhi trees, a statue of the Goddess of Mercy standing in the middle of a lotus pond, and a sanctum house housing a bronze bell, numerous sculptures, and red lacquered boards with engraved writings. The main hall is three stories, which houses three Buddha statues (Amitabha, Mahasthamaprapta Bodhisattva, and Avalokitesvara Bodhisattva) and intricate paintings of Buddhist mythical creatures and legends. 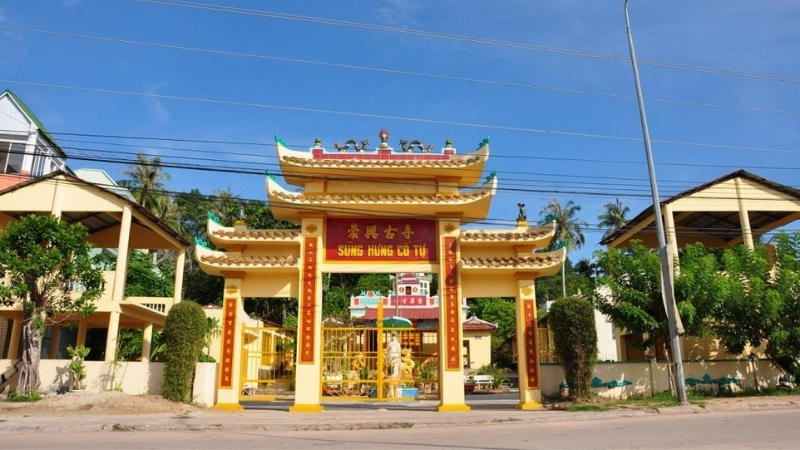 Hung Long Tu Pagoda or Su Muon Pagoda was built in the style of traditional folk architecture in the early 1930s. It used to be a small pagoda on the ground floor with leaves and wood. The temple has a three-door gate, located at the foot of the mountain, 800 meters from the temple and to reach the temple, and tourists are required to climb over 60 stone steps.

In front of the pagoda is a statue of Quan Am exposed on the lotus throne. The statue is next to a large rock carved into the shape of Mr. Tiger lying under a bamboo root, based on the legend from the Phu Quoc era. Behind the temple is a statue of Thich Ca Buddha, next to a high 200-year-old “Konia” tree with luxuriant leaves and branches. The pagoda has a main hall which is built on 3m high stone to worship many large Buddha statues with sharp sculpting lines surrounded by a firm railing. This main hall is very airy and cool thanks to the lush forest all year round. Local people come here mainly for worshipping, some come here to see the beautiful scenery, breathe fresh air and relieve the pressure of life. 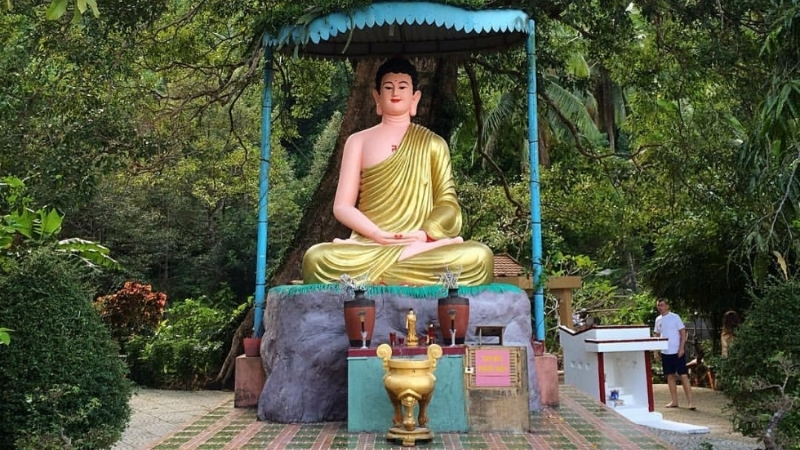 Nguyen Trung Truc temple is the largest temple among nine temples in Kien Giang which worships Nguyen Trung Truc, a national hero well-known for his resounding feats of French Espérance. The temple was built in 1869 after his death. It has a traditional style, the roof of the house is curved with a yin and yang tile. The top of the roof is covered with a picture of a dragon, painted with a red look of respect. The main shrine has items commonly found in Southern temples.

Inside the temple, after the gate is a stately bronze statue of Nguyen Trung Truc, and his tomb which was built in 1986. There is also a medicine room with good doctors for free. Every day, a lot of people come to treat illnesses, take medicine, or do merit. Besides, there is also a solemn festival celebrating his death, traditional cultural activities such as boat racing or chess playing on the 27th, 28th, 29th of the lunar month. 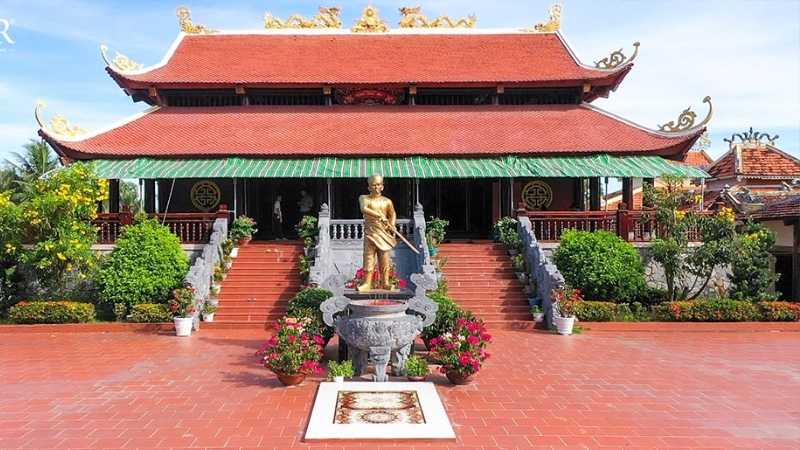 This temple stands out from other temples on Phu Quoc Island as it houses not only Buddhist swastikas and statues, but also Christian crosses, and Islamic crescent moons. The temple also commemorates popular figures such as Vietnamese poet Trang Trinh, Chinese president Sun Yat-Sen, French poet Victor Hugo, and Jesus Christ as some of its many patron saints. 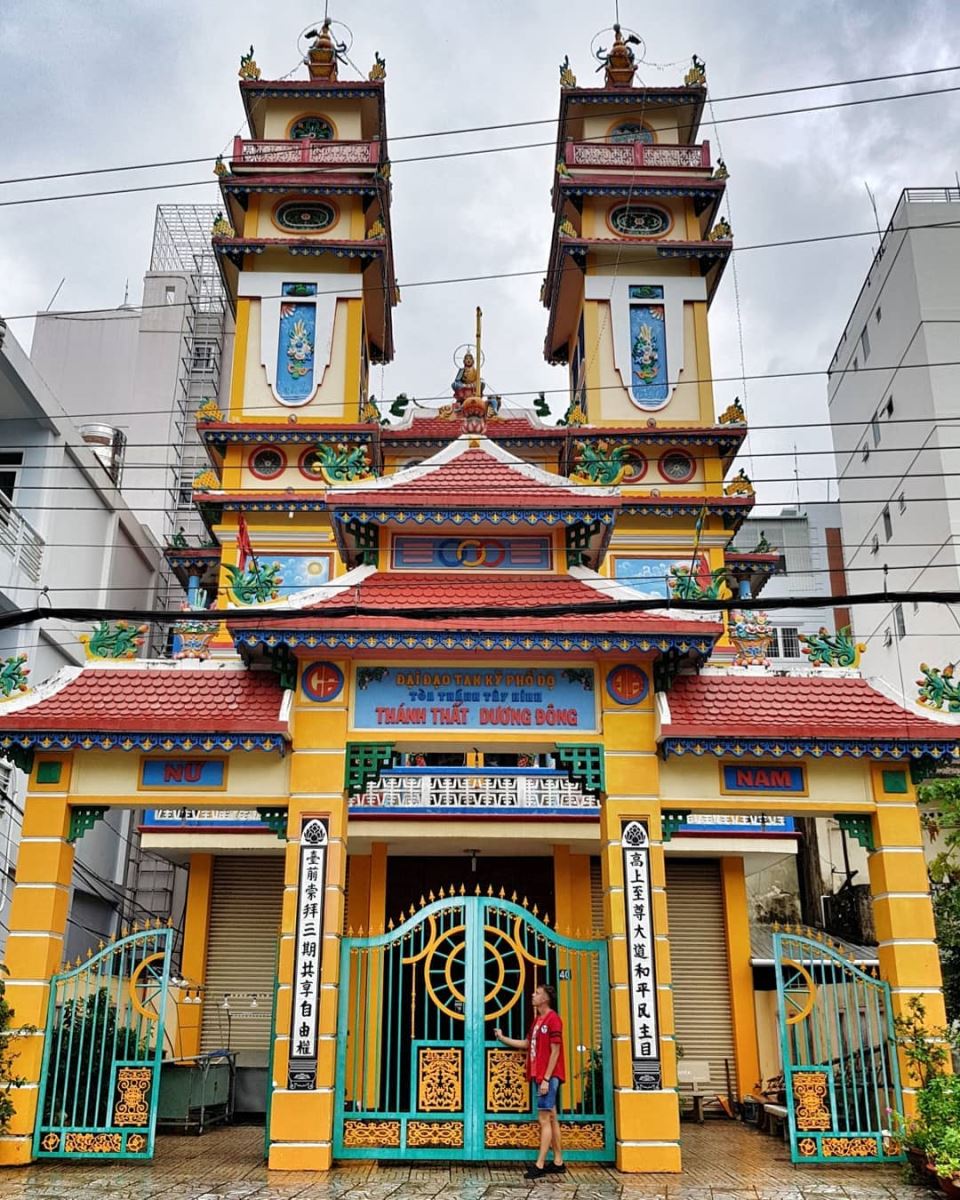 About three kilometers north of Duong Dong, you find the small Dinh Ba Temple. The main purpose of the building is to pay homage to Thuy Long Thanh Mau, who is considered the first person to discover this Island. Thuy Long Thanh Mau was believed to be a woman from the family of Cambodian kings today. She tried to escape to Phu Quoc island from the enemy. At that time, she created a field of grass to feed the buffalo herds that she brought with her. She also called on people to clear wasteland to cultivate and raise livestock.

Phu Quoc people consider her as the one who discovered and built this island and honored her as Thuy Long Thanh Mau, so the people of Phu Quoc held a ceremony to worship her on the full moon day of January every year. Every year, before the holiday, the people here will redecorate the altar for her to be splendid and dignified. 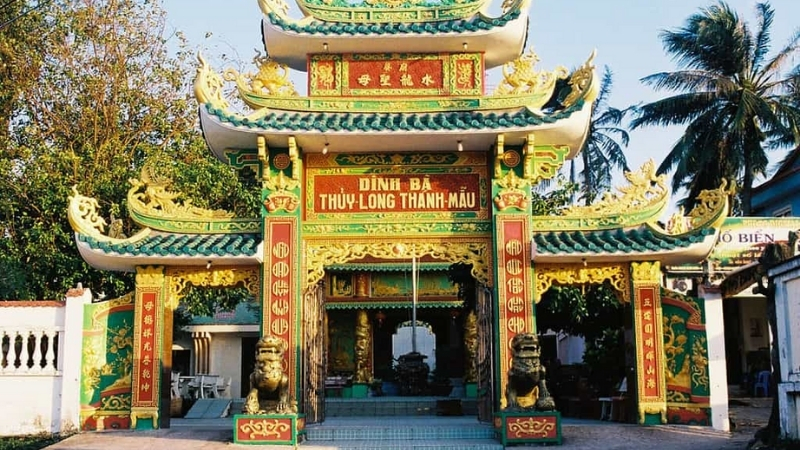 Phap Quang is a Chinese Buddhist Pagoda close to the tourist strip of Phu Quoc Island, built in 1986 by Minh Phap citadel. The temple has undergone many renovations, most recently in 1992.

When entering the temple, you will see many arhat statues with different expressions that look very beautiful and majestic. The halls of the Bodhisattvas Avalokiteshvara and Ksitigarbha are exceptionally beautiful. 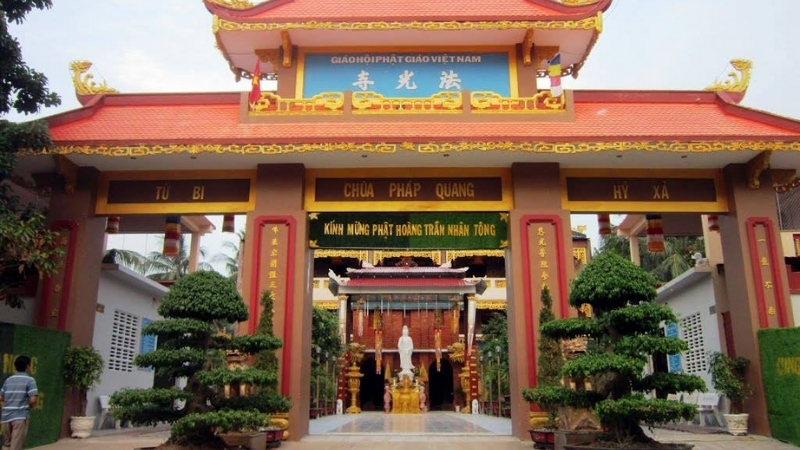 Hope that you are able to choose at least one temple or pagoda to visit for your trip to Phu Quoc. If there is anything you need to know about these temples or Phu Quoc in general, contact us for further assistance.

You might also look for other places to visit in Phu Quoc. 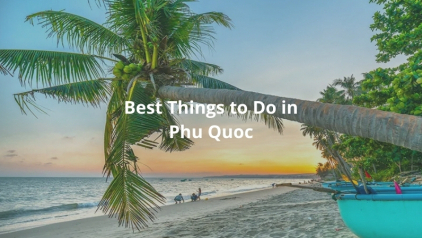 Top 15+ Best Things to Do in Phu Quoc