Planning Itinerary for Visiting The Temples of Angkor

Many questions appeared before visiting The Temples of Angkor, let's get ready after you consult this information.

The Angkor complex is the largest religious architectural complex in Cambodia, covering 1626 square meters. It was originally founded as a Hindu temple for the Khmer Empire, gradually transforming into a Buddhist temple, it is a combination of two basic architectural features: mountain temple architecture along with long narrow corridors.

The Angkor complex became a symbol of Cambodia and appeared on the national flag of this country. In 1992, The Temples of Angkor was recognized by UNESCO as World Cultural Heritage. It is the top tourist attraction in Cambodia.

How to buy the Angkor pass

Visiting Angkor requires you to buy the Angkor entrance pass. It is necessary to keep this pass carefully during your visit days within the park because you will be checked regularly at most of the checkpoints in front of each monument. The ticket booths open daily from 5 a.m. to 5.30 p.m. and don’t buy the ticket from hotels or any shops because they are not authorized to sell Angkor passes. There are only a few places to get valid passes. 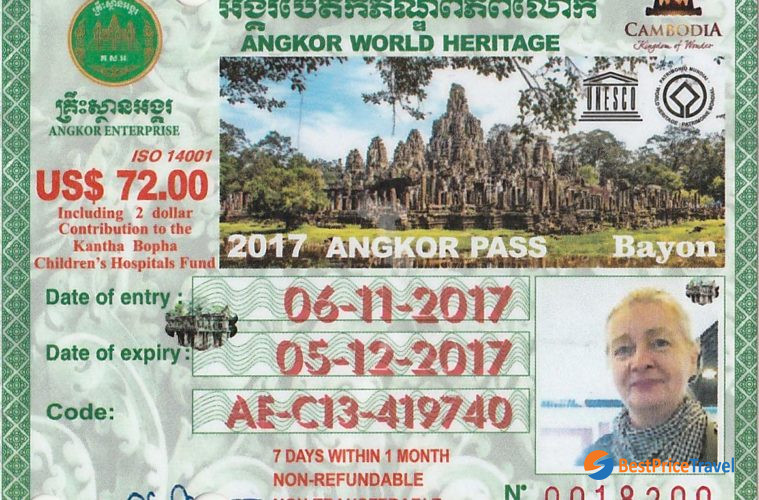 Keep your pass carefully during the valid time

According to my experience, to visit the Angkor complex in the most detailed and fullest way, you should book Angkor tours with a tour guide from a reputed local travel agency. The advantage of exploring the Angkor complex by tour is you can save time finding places to rent transportation to move between points in Angkor and especially visiting Angkor complex without understanding the history of its is absolutely wasted, you will need a tour guide who truly an expertise in Cambodia history. Transportation between points in the Angkor complex is also included in the tour. Please consider if you want to rent a tour guide, some people standing near the entrance or even follow you to ask for being your guide, ask the staff at the point you buy Angkor pass to find a suitable tour guide. Some people just learn by heart the stories of the Angkor complex so if you ask for more detailed information, they cannot ensure to respond to you at all.

From 1st February 2017, the prices for Angkor passes are:

Remember that passes are not transferable due to containing your photo taken by a webcam at the ticket office and are not valid after the validity date printed on them. If you lost the pass, you won't have to pay a penalty, however, you must buy the new pass to keep continuing your journey. Check the pass carefully to ensure that it is not stamped or holes punched into it and do not forget to cover your shoulders and knees, especially if you are women. 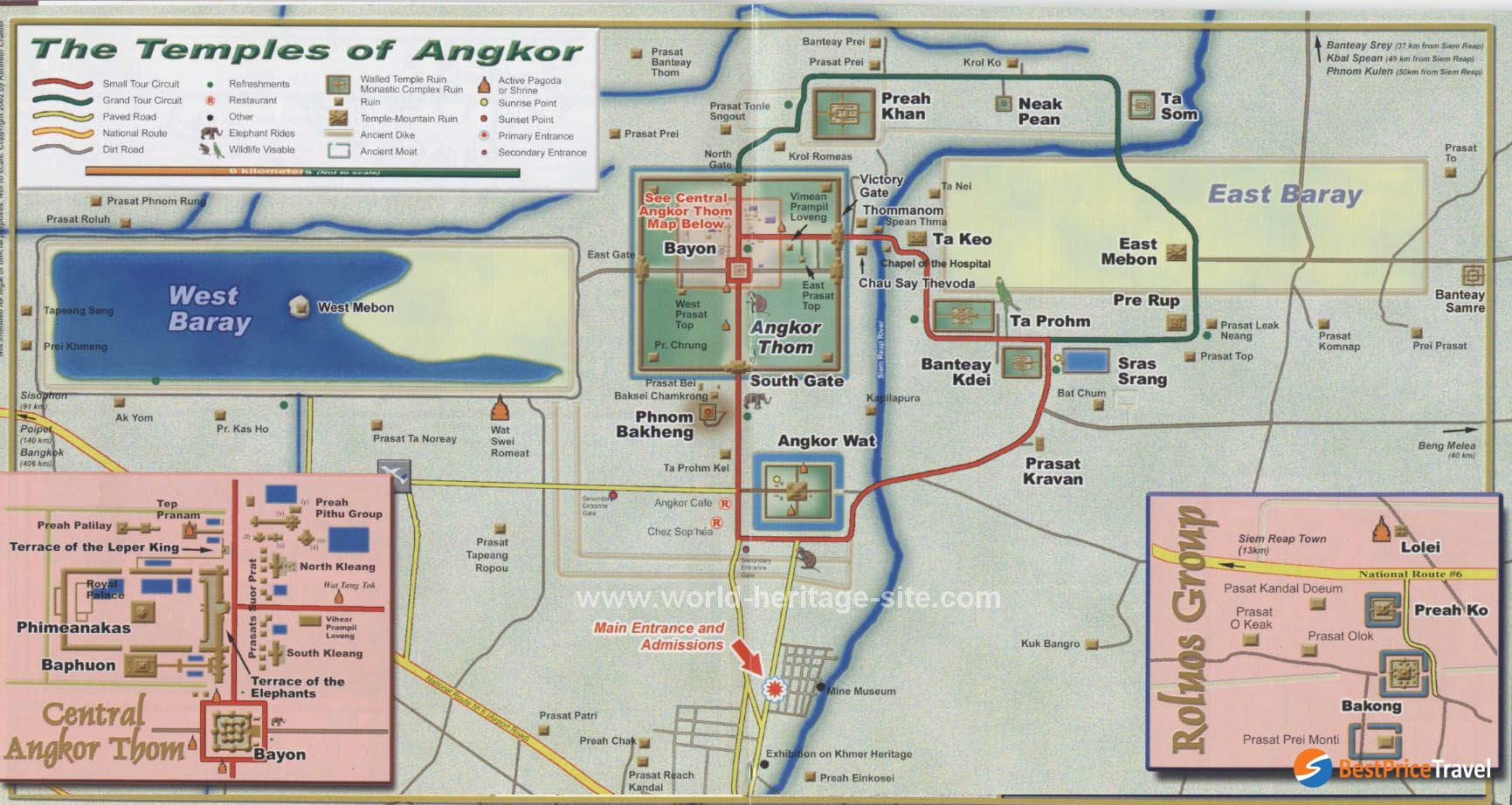 On the Angkor map above, you can see the red line and green line, the red line is for the small tour circuit and the green line is for the grand tour circuit. Some tourists buying 1-day tickets are ambitious to visit all these points in just one day. It is such a pity if you spend a little time discovering The Temples of Angkor. Between 3 choices: 1-day pass, 3-day pass, and 7-day pass, I highly recommend 3-day pass which is completely fitted to experience all the attractions and activities in Angkor complex such as: take beautiful photographs, discover the glorious historical stories of the superb monuments and watch the sunset, sunrise on the hilltop.

Transportation in Angkor: Tourists can choose to rent one of these vehicles: 4-seat car, motorbike, bicycle, tuk-tuk or require services directly from Cambodia tours. 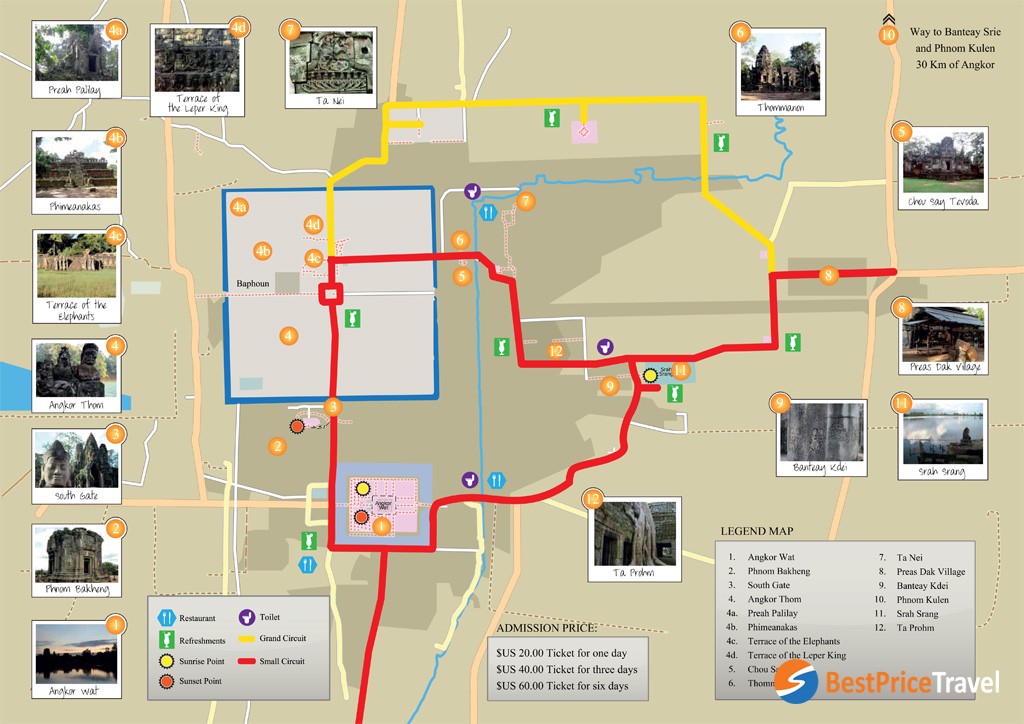 Following the map, you can split the itinerary into Small and Grand loop, the red line is for small tour circuit which is suitable for 1-2 days to discover all the attractions on this line:

Angkor Wat: Built in the early 12th century, Angkor Wat is the climax of Khmer architecture: A gigantic three-step pyramid is adorned by nine slender towers of enormous height. It was dedicated to the Hindu god Vishnu, the preserve of the world.

Phnom Bakheng: This is the first temple built in the Angkor area, marked the movement of the capital of the Khmer empire from Roluos to Angkor in the 19th century. Phnom Bakheng is a Hindu temple, located between Angkor Wat and Angkor Thom. Especially, every day at about 6 p.m., visitors usually gathered in Phnom Bakheng foothill to reach the sunrise.

Angkor Thom: Angkor Thom is a quadrangle of defensive walls totaling 12 kilometers that once protected the Khmer capital of the same name (Angkor Thom means 'Great City'). Being built in the late 12th and early 13th centuries by King Jayavarman VII, the walls are divided by two axes running north-south and east-west. Angkor Thom has 4 gates: east, west, south, and north. It can be seen that the decorated style on the surface of the temples in Angkor Thom are Naga, Lord Buddha, Apsara dancers, lion, and many kinds of extremely meticulous and sophisticated patterns.

Bayon: This is the most impressive architectural temple in the center of the Angkor Thom complex due to the grandeur of scale as well as the emotions that it gives viewers. The temple consists of 54 large and small towers Lokesvara’s face on the surfaces which symbolizes the divine observation of Cambodia’s four directions.

Terrace of the Elephants: The 350m-long Terrace of Elephants was used as a giant reviewing stand for public ceremonies and served as a base for the king's grand audience hall. 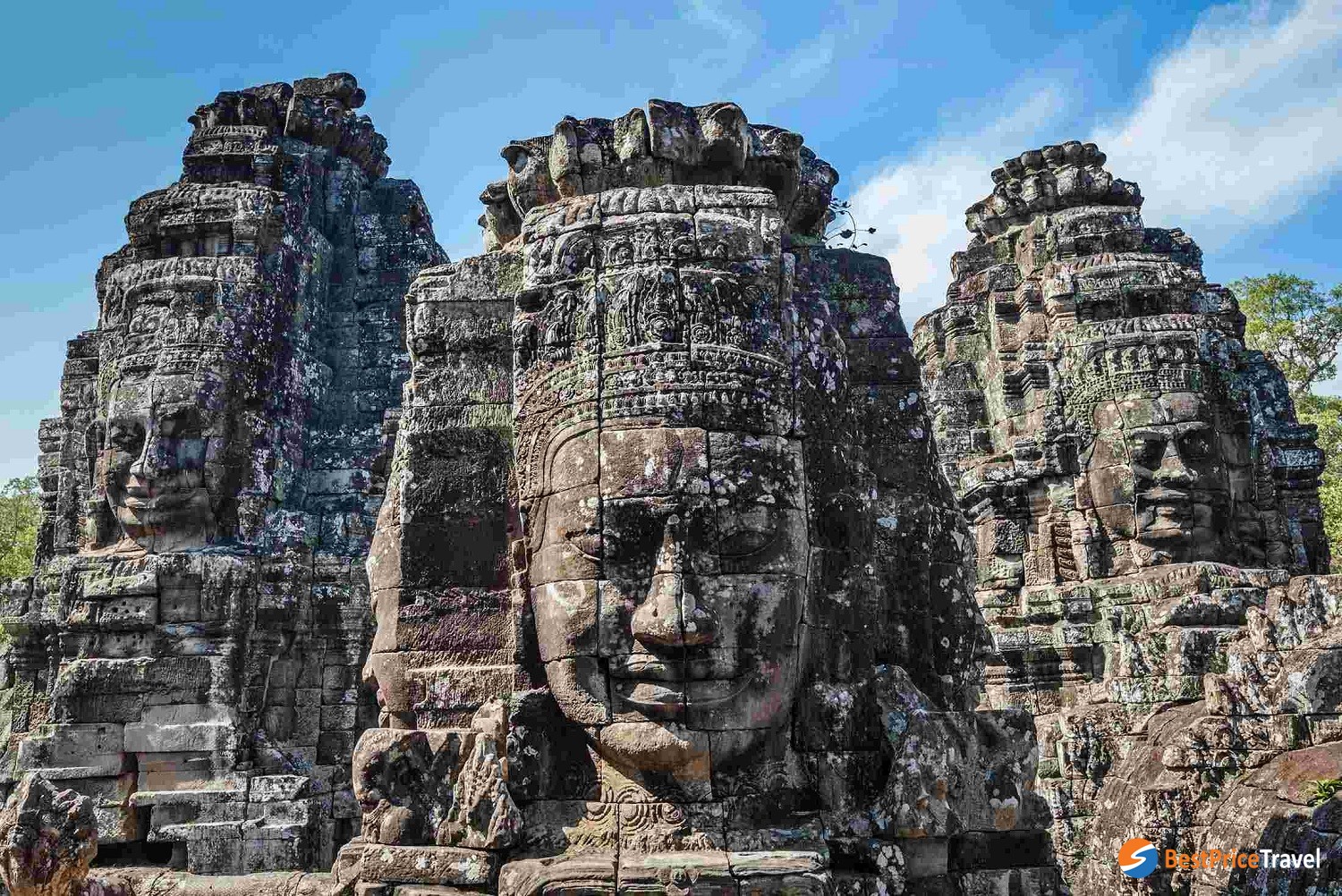 Phimeanakas: is a Hindu temple in the Khleang style, built at the end of the 10th century in the shape of a three-tier pyramid as a Hindu temple. On top of the pyramid, there was a tower, while on the edge of the top platform there are galleries. Phimeanakas is located inside the walled enclosure of the Royal Palace of Angkor Thom.

Preah Palilay: This small Buddhist sanctuary in the wooded area north of the Royal Palace in Angkor Thom has several attractive features and is well worth the short detour.

Terrace of the Leper King: is located in the northwest corner of the Royal Square of Angkor Thom. It was built in the Bayon style under Jayavarman VII. The statue depicts the Hindu god Yama, the god of death.

Chau Say Thevoda: is located in the east of Angkor Thom.

Ta Keo: it has five sanctuary towers arranged in a quincunx, built on the uppermost level of a five-tier pyramid consisting of overlapping terraces (a step pyramid), surrounded by a moat, as a symbolic depiction of Mount Meru.

Ta Prohm: Located approximately one kilometer east of Angkor Thom and on the southern edge of the East Baray.

Banteay Kdei: meaning "A Citadel of Chambers", also known as "Citadel of Monks' cells", is a Buddhist temple. It is located southeast of Ta Prohm and east of Angkor Thom.

Prasat Kravan: is a small 10th-century temple consisting of five reddish brick towers on a common terrace in Angkor Thom. 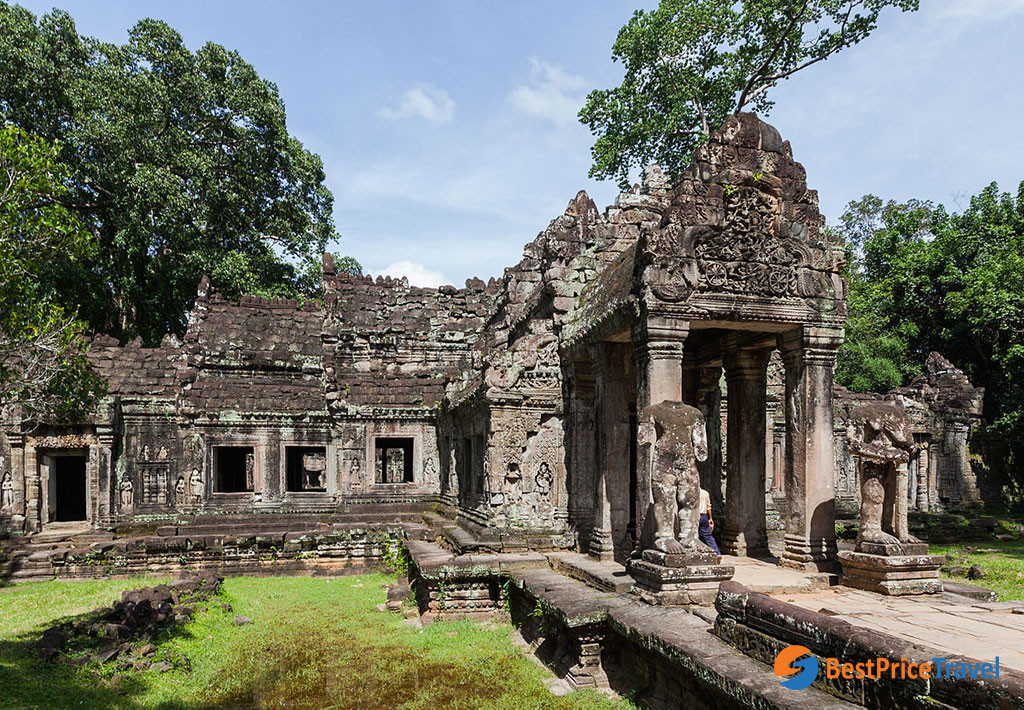 For further journey, you can follow the green line which is for grand tour circuit, these attractions are indispensable:

Preah Khan: It is located northeast of Angkor Thom. It was the center of a substantial organization, with almost 100,000 officials and servants. The temple is flat in design, with a basic plan of successive rectangular galleries around a Buddhist sanctuary complicated by Hindu satellite temples and numerous later additions.

Neak Pean: is an artificial island with a Buddhist temple on a circular island in Jayatataka Baray, which was associated with Preah Khan temple, built during the reign of King Jayavarman VII.

Ta Som: is located northeast of Angkor Thom and just east of Neak Pean. The temple consists of a single shrine located on one level and surrounded by enclosure laterite walls.

East Mebon: The sculpture at the East Mebon is varied and exceptional, including two-meter-high free-standing stone elephants at corners of the first and second tiers. Religious scenes include the god Indra atop his three-headed elephant Airavata, and Shiva on his mount, the sacred bull Nandi. Carving on lintels is particularly elegant.

Pre Rup: Located just south of the East Baray, Pre Rup is aligned on a north-south axis with the East Mebon temple, which is located on what was an artificial island in Baray. The East Mebon was also a creation of the reign of Rajendravarman. Pre Rup's extensive laterite and brick give it a pleasing reddish tone that is heightened by early morning and late afternoon sunlight.

Sras Srang: is a baray or reservoir at Angkor, located south of the East Baray and east of Banteay Kdei. This is also an ideal place to watch the sunrise.

You could mix up all these attractions into one day and reserve them, however, 3 days is the best time to visit The Temples of Angkor.

You may also like: Beyond Angkor Wat, What Else Siem Reap Has to Offer? 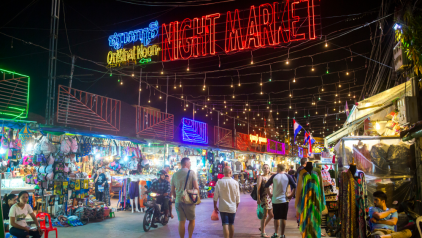 Beyond Angkor Wat, What Else Siem Reap Has to Offer? 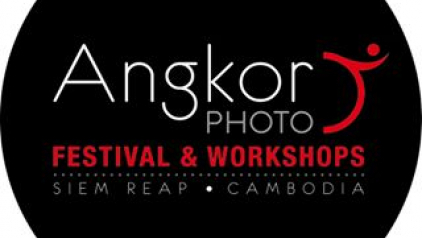