Air travel is the most convenient way to get to Vietnam as well as to get around the country. For a smooth arrival, you should make up your mind about which airport to fly to in Vietnam. This article will give you an overall guide to Vietnam's main airports for both international and domestic flights. 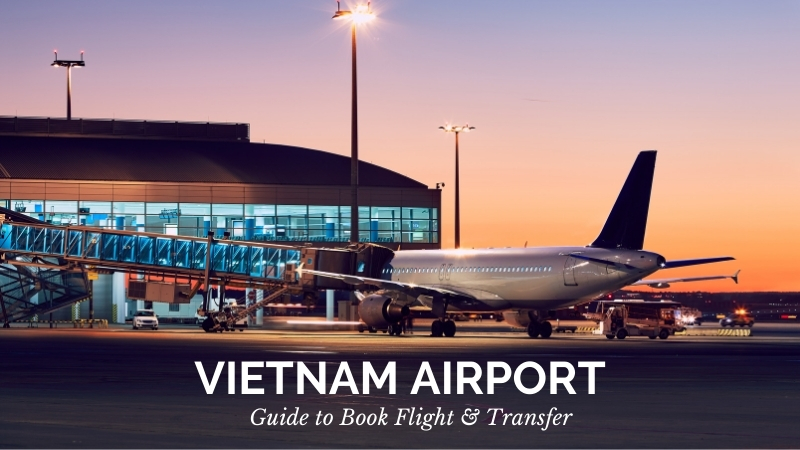 In general, there are a total of 33 airports in Vietnam, consisting of civil airports, military airports, private airports, and former airports. Among those, civil airports including international and domestic ones are used to meet the need for tourism.

When it comes to domestic flights, there is a multitude of Vietnam airports serving frequent air routes between distant destinations within the country. For those who plan a visit to Vietnam by air, keep scrolling to get into details of main Vietnam airports and choose the best destination for your arrival.

Up to now, Vietnam has 11 international airports located in 11 large cities from North to South. However, not all those mentioned are served with current international flights. In specific, you can arrive at 8 international airports: Noi Bai (Hanoi), Tan Son Nhat (Ho Chi Minh City), Da Nang, Can Tho, Phu Bai (Hue), Phu Quoc, Cat Bi, and Cam Ranh (Nha Trang). For those who submit a Vietnam visa on arrival, it is possible to arrive at only 3 airports: Noi Bai, Tan Son Nhat, and Da Nang.

Let’s take a glance at these 11 Vietnam international airports located in 11 famous tourist destinations that you can choose to fly in.

Covering an area of 650 hectares, Hanoi International Airport is the second-largest airport in Vietnam, with 2 terminals: T1 for domestic routes and T2 for international routes. From 6:00 am to midnight, there is a free shuttle bus running every 10 – 15 minutes between two terminals. 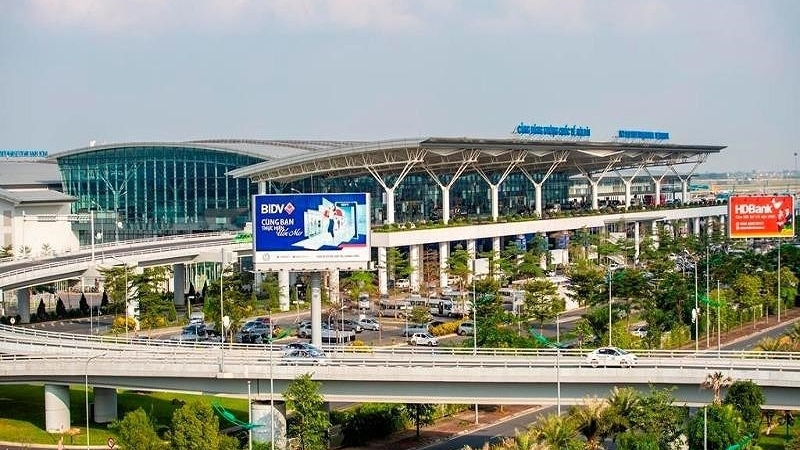 Known as the biggest airport in Vietnam (800 ha), Tan Son Nhat welcomes nearly 40 million passengers per year, with a large number of flights in and out. Ho Chi Minh airport operates 2 terminals: Domestic T1 and International T2, connected by a 500m covered walkway. The airport is always busy with 80 check-in counters and 20 immigration counters.

Terminal 1: The domestic terminal consists of 2 floors: the ground for the domestic arrival hall and baggage claim; the line-up for the security check and departure hall.

Popular routes: Ho Chi Minh airport is always busy with plenty of international and domestic flights from/ to popular destinations in Vietnam and over the world. The busiest international routes connect Ho Chi Minh City with Singapore, Bangkok, Seoul, Kuala Lumpur, Taipei, Tokyo, and Siem Reap. Meanwhile, the domestic Saigon – Hanoi route is the busiest in Southeast Asia and the 6th busiest in the world, with a frequency of 596 flights per week. 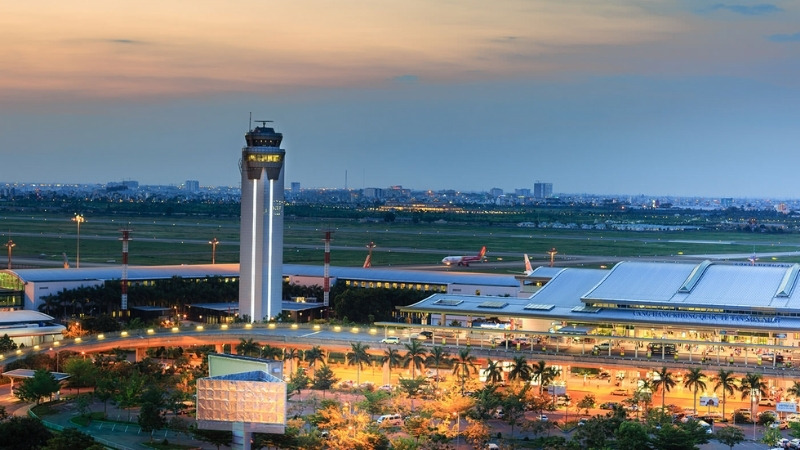 Built as a transportation hub in central Vietnam, Da Nang airport is the third-largest after Hanoi and Ho Chi Minh airport. The traffic volume ranges from 100 to 150 flights per day on average. There are two terminals for domestic and international flights, which can be easy to go back and forth in 10 minutes through a beautiful green connecting corridor.

Terminal 1: The domestic terminal has 3 floors and 1 basement with more than 40 check-in counters and kiosks for each airline. You can find lounges, shops, and ATMs in the arrival hall.

Terminal 2: The international T2 has 2 floors divided into the arrival hall on the 1st floor and the departure station on the 2nd floor. There are 24 check-in counters and 22 immigration counters which are less busy than those in Hanoi and Ho Chi Minh airport.

Set location in Hai Phong province, Cat Bi airport is 125 km to Hanoi and 60 km to Halong Bay. This airport is able to serve 5 million passengers per year with a capacity of 1,000 passengers/ rush hour. Until now, there are very few airlines exploiting around 20 flights from/ to Cat Bi. 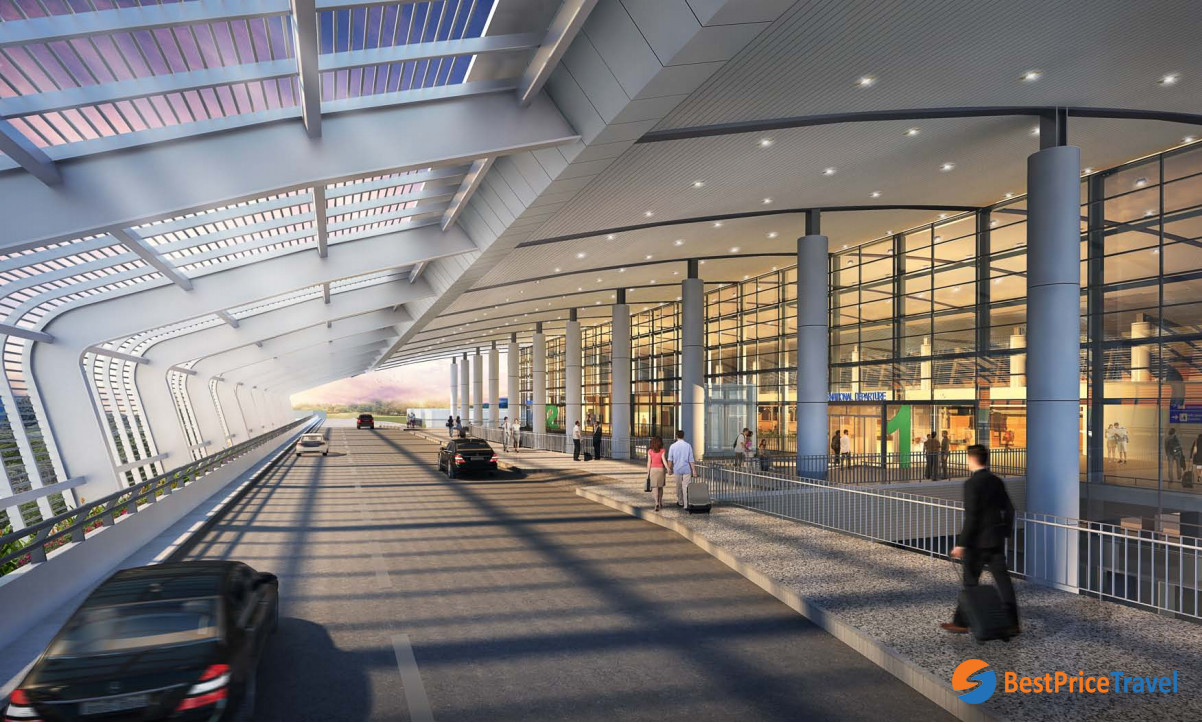 Opened in December 2018, Van Don Airport is a transportation hub and the nearest airport to Halong Bay. This is the very first privately-run Vietnam international airport with a construction cost of 7.46 trillion VND. Van Don has quickly become the “World’s Leading New Airport” by World Travel Awards (WTA) in 2019.

Terminal: Van Don Airport has one passenger terminal that has a capacity of 2.5 million passengers and covers an area of almost 27,000 m2. The airfield has 4 jet bridges, 4 baggage carousels, 8 security gates, and 31 check-in counters.

Services: Built as a newly advanced airport, Van Don is equipped with an up-to-date terminal building and high-class facilities. Here, you can find any world-class services at an international airport.

Popular routes: Currently, there are frequent domestic flights from Ho Chi Minh and Da Nang to Van Don. With regards to international routes, you can expect a direct flight from Shenzhen/ Shanghai/ Seoul to Van Don. In the future, more flights are planned from Hainan, Nanning, Guangzhou, and some cities in Japan, Thailand to fly into Van Don Airport. 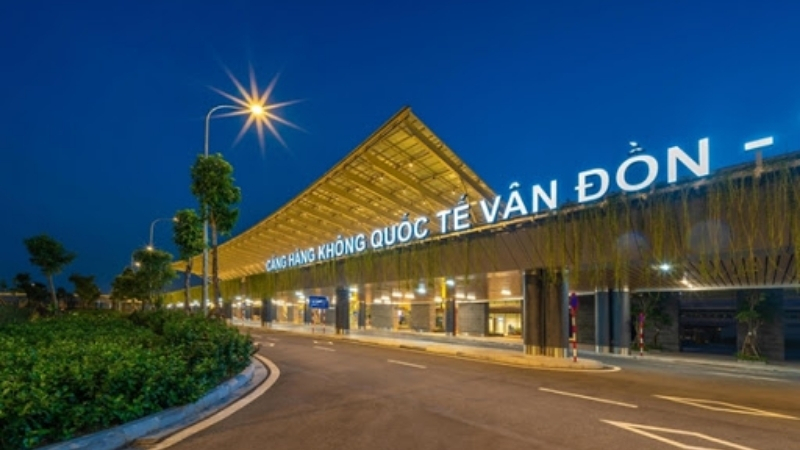 Phu Bai Airport officially comes into operation in October 2005 with a capacity of 1.5 million passengers per year. It is a small airport located in central Vietnam, which is 2.5 hours to Da Nang and 3 hours to Hoi An.

Terminal: The terminal has 2 floors: the 1st one for arrival, check-in, and food concession; the 2nd one for departure.

Services: Hue airport is equipped with adequate facilities and fast security. You can get any basic services like banking & ATMs, luggage catering, airport taxi, restaurants, and so on. 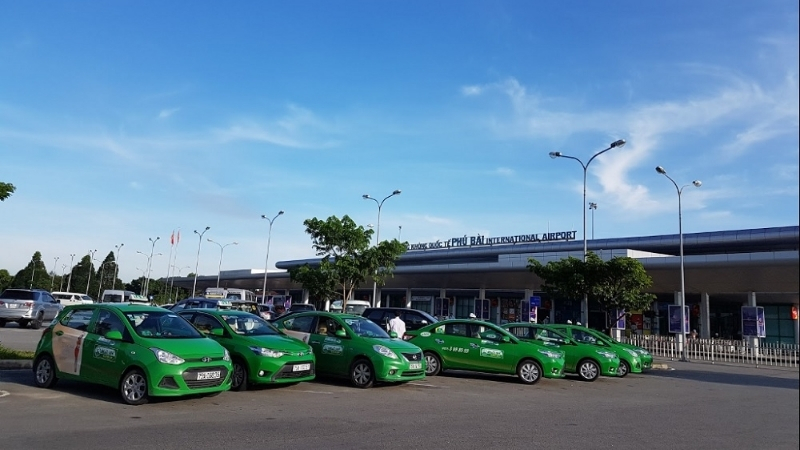 Located 30 km from the city centre, Cam Ranh is a Vietnam main airport serving the Nha Trang area. Each year, Cam Ranh Airport welcomes nearly 5 million passengers to the beautiful coastal city. The unique part of this airport is its eye-catching design and architecture for outdoor spaces and pedestrian walking.

Terminal: Inspired by the shape of a swallow’s nest and the waves of Nha Trang Beach, the terminal building in Cam Ranh Airport is made up of dedicated levels for international and local tourists. The international terminal T2 has 4 aerobridges and 10 boarding gates to serve more than 20 international airlines per annum.

Services: The advanced facilities at Nha Trang airport give you the best convenience with different services of currency exchange, ATMs, shopping, restaurants, transfer options, and other more. 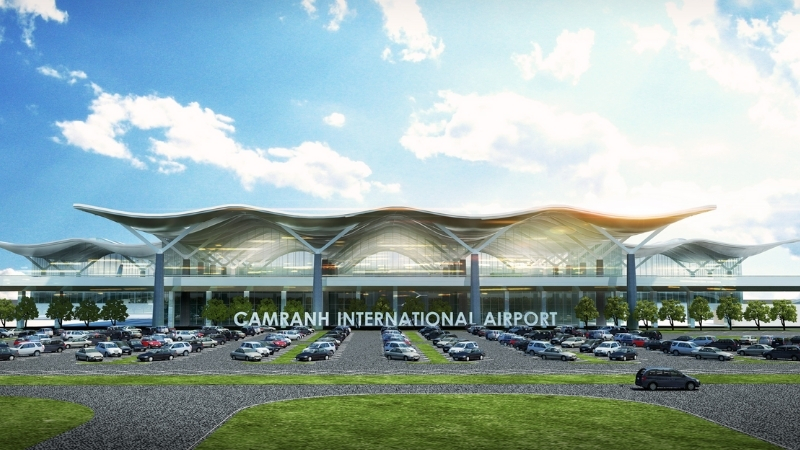 Located in the outskirts of Lam Dong province, Lien Khuong is around 30 km south of Da Lat's center town. This is the largest among the 4 airfields in the Central Highlands.

Terminal: In the shape of the wild sunflowers, Da Lat airport has 2 stories with a total floor area of 12,400 m2. In December 2019, the major reconstruction was completed to handle bigger aircraft and a capacity of 2 million passengers.

Popular routes: The most frequent flight routes out of Da Lat airport are to Hanoi, Ho Chi Minh City, Da Nang, Vinh, Hai Phong, Bangkok, Seoul, Kuala Lumpur, and Lanzhou. Beyond this, the airport has been upgraded to the international standard which helps Da Lat connect with more international flights to Singapore, Laos, Cambodia, and other cities in South Korea. 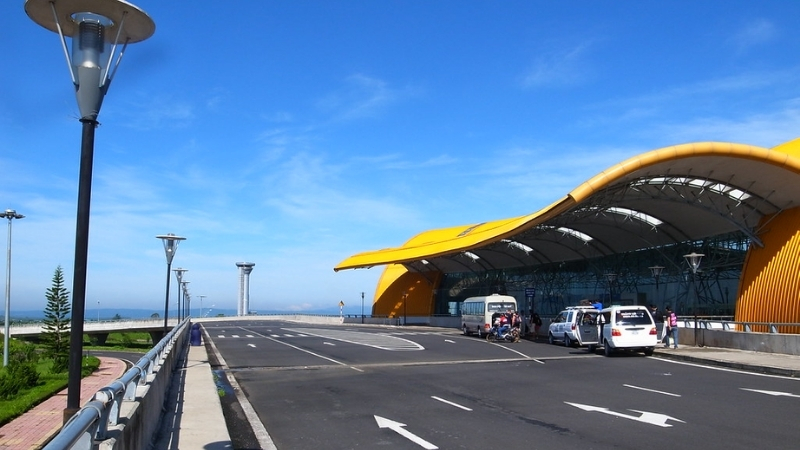 Completed in 2012, the new Phu Quoc International Airport has rapidly become one of the main airports in Vietnam. The airport covers a vast area in the “Pearl Island” of southern Vietnam. It has been built at the cost of 16.2 trillion VND invested by the standards of the World Civil Aviation Organization (ICAO).

Terminal: Phu Quoc airport offers a high-class terminal with two functional areas located on both sides: the domestic in the west and the international in the east. There are separate pathways connecting the traffic from the public area and the corridor to the flight lounges, creating a high-privacy of one-way passenger flow. The terminal has 36 check-in counters, 10 security scanners, and 3 baggage conveyors in total.

Services: For the best convenience, Phu Quoc airport is home to plenty of dining and shopping venues. The passenger services are rationally arranged to meet the requirements of security and safety. Interestingly, this island-district has many hotels and resorts situated in the surroundings. So, you can easily book an airport transfer to your accommodation.

Popular routes: Flights from/ to Hanoi, Ho Chi Minh City are operating daily, while other domestic routes between Phu Quoc and Da Nang, Hai Phong, Vinh are scheduled around 20 – 21 flights per month. For international routes, Phu Quoc airport has non-stop flights to 9 destinations in 3 countries, the most popular ones including Seoul, Guangzhou, and Kuala Lumpur. 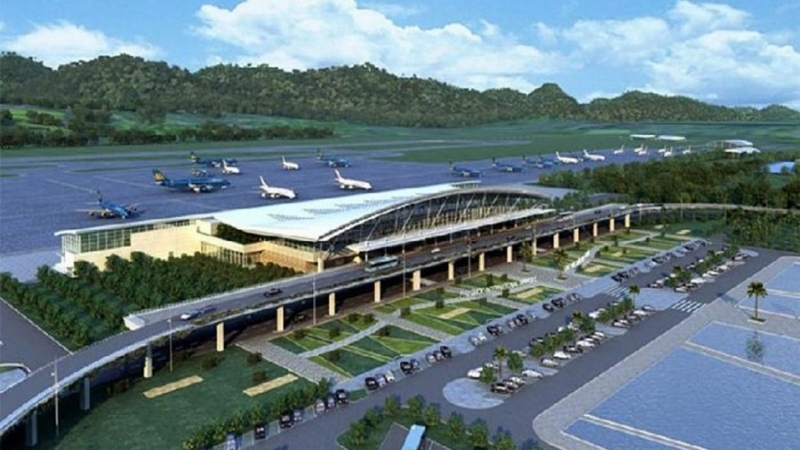 Can Tho International Airport (VCA)

Can Tho Airport, formerly known as Tra Noc Airport, is a medium-sized civil airfield in the Mekong Delta region. During the Vietnam War, the airport was originally constructed to be an airbase by the US Air Force.

Terminal: The terminal building has two zones: the right flank from the main entrance for domestic routes and the left one for international routes. Since the latest renovation, Can Tho airport is well-equipped with the advanced technology of aviation.

Services: Built to meet the need of tourism in Mekong Delta, Can Tho airport offers a range of passenger services: cafeteria, currency exchange, tourist information, hotel booking, taxi transfer, souvenirs, and other more.

Popular routes: Until now, there are only domestic flights to Can Tho from Hanoi, Da Nang, Con Dao, Hai Phong, Da Lat, Phu Quoc, Vinh, etc. 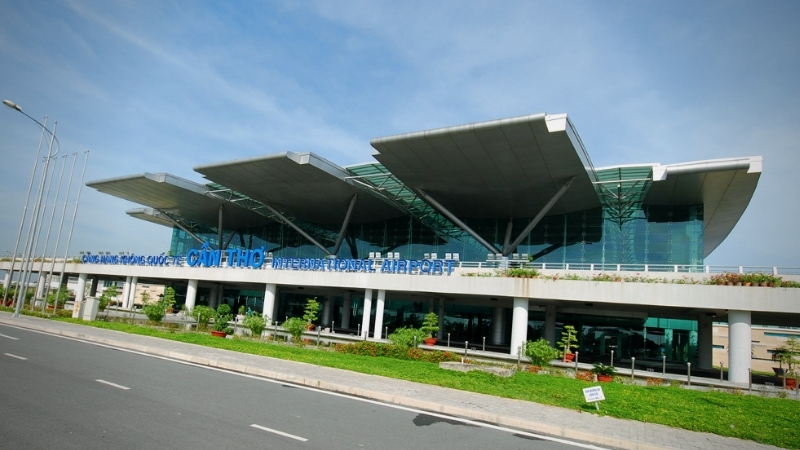 In north-central of Vietnam, Vinh International Airport is a busy transportation hub which is 7 km to Vinh City, Nghe An Province. In addition to the use of the civil airport, Vinh airport used to be one of the two main military airbases besides Gia Lam Airport, Hanoi.

Terminal: The terminal has 28 check-in counters and 4 boarding gates designed to receive a 3-million-passenger capacity per year. You can find the arrival on the 1st floor while the 2nd floor is for departure.

Services: There are up-to-date facilities, a VIP lounge, and a dozen of airline services for passengers in need.

Popular routes: At the moment, you can only find domestic flights to Vinh International Airport from Ho Chi Minh City, Buon Me Thuot, Hanoi, Da Lat, Nha Trang, Phu Quoc, and Can Tho. In the long term, it is expected to exploit international flights from/ to Kuala Lumpur, Tokyo, and Seoul. 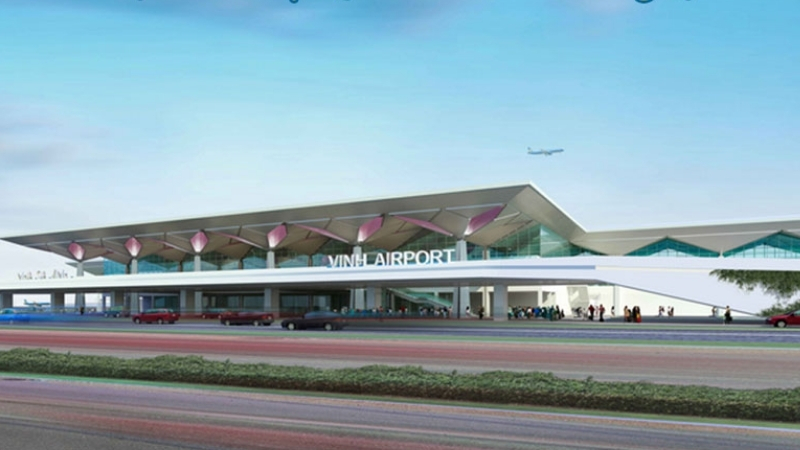 Along with those mentions, Vietnam has a variety of domestic airports making distance travel around the country smoother.

After this airport guide, you should make up your mind about how to book a flight in Vietnam, when to hunt for the best flight deal, and which the best way of Vietnam airport transfer is.