A Glimpse of Gau Tao Festival in Sapa

In the early spring, throughout the highland villages of the Mong people, Gau Tao Festival is one of the most interesting festivals attracting a large number of tourists all over the world.

The Hmong people have a rich and varied spiritual life. This factor makes up the Mong traditional culture with many characteristics. One of the typical festivals representing the Hmong's tradition is Gau Tao. Referring to the Hmong cultural tradition, not only relates to the practices of farming and husbandry but also in the beliefs, customs, and spirituality. In particular, all theories in material activities and spiritual activities revolve around relationships of family, lineages, villages and those beliefs are recreated through this festival.

According to folklore, if a couple who had married for many years hadn't had children, the husband would go to some hills to beg the gods there to help the family give birth to a son. The family will hold a bucket festival in 3 years or 5 years and invite the Mong relatives to share the joy and thank the gods for help. 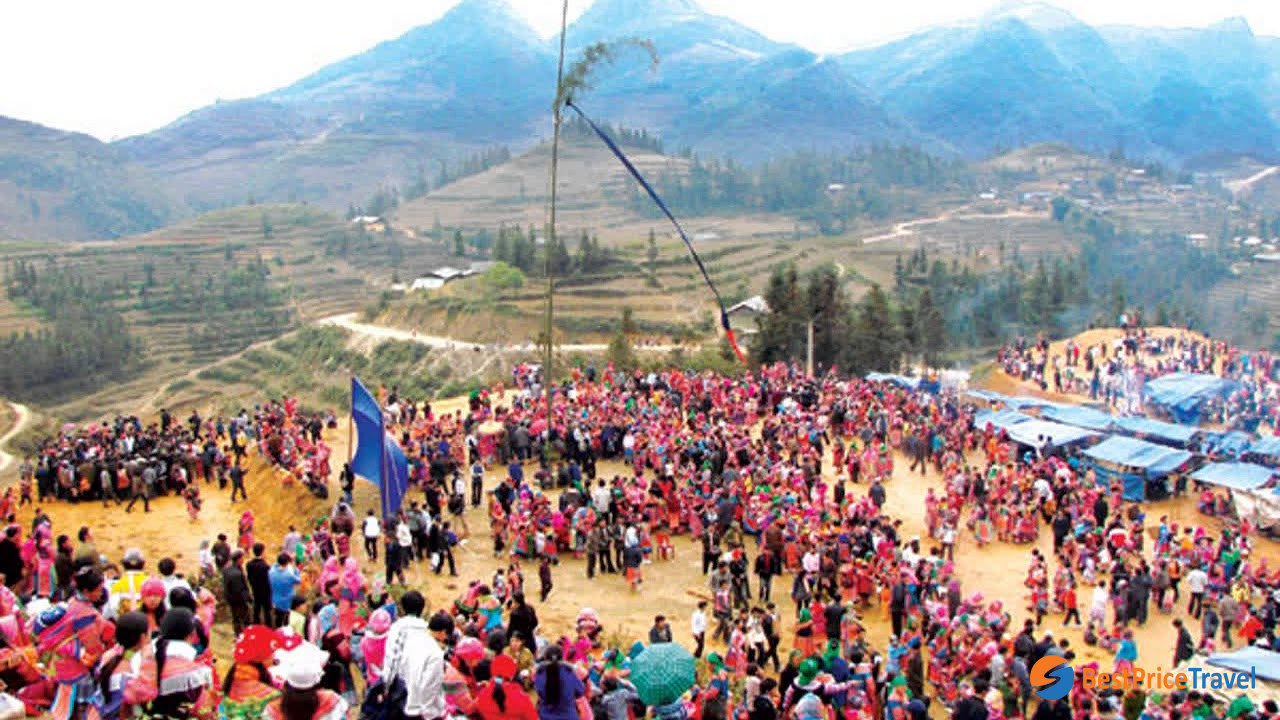 After that, when the wife becomes pregnant and gives birth to the desired child, the family will hold the Gao Tao Festival as promised to the Gods.

The origin of the H'mong laden festival starts from there, at first it was associated with the child-praying organized by a specific family in the village. However, only wealthy families can host this festival. Later, with the attention of the local authorities and the festival community expanded, this festival was held regularly and became a ritual of the village community. Therefore, the original meaning of the ceremony has changed. In addition to praying for children, they also pray for good health, good luck, good crops, and prosperous life.

Gau Tao festival is held in January every year, but preparations are made from the end of December.

Do you know the new year tree? It is a tree related to bamboo and is often used on Tet in Vietnam as a tool to ward off evil spirits as well as bring good luck to homeowners. The New Year tree is the main symbol of the H'mong laden festival because of its association with holiness. Therefore, it is always very carefully chosen. The selected trees must be straight, not wormed, and especially not fallen trees.

When cutting trees, the worshiper or the homeowner must pray to the gods, then cut down it. When cutting, the tree isn’t allowed to fall to the ground, the direction of the top of the tree should be tilted to the East, neither can the tree be placed on the ground nor let other people cross it. 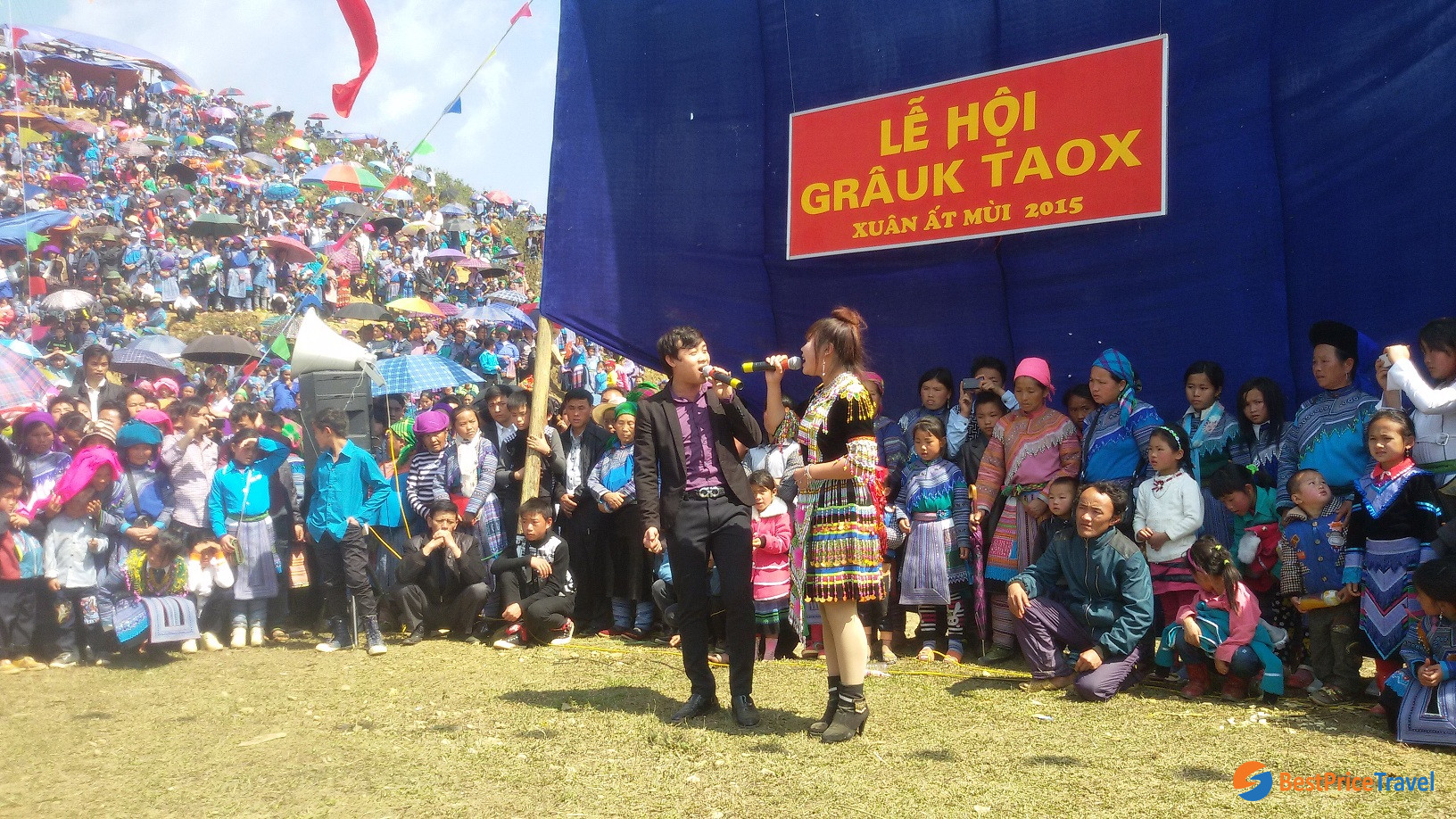 Singers In Chosen Families Sing For Health, Luck, And Success

Before setting up the New Year's tree, the worshiper had to dissect the chicken and pray to the mountain gods to beg for permission for them to organize the Festival there. The tree represents the ladder leading the offerings of the gods to the sky. The H'mong people in Ha Giang build three trees symbolizing the three pillars against the sky.

The tops of the trees must always turn to the East with the notion of the direction of proliferation. On the New Year's trunk hangs a black or red indigo strip, a bottle of wine, a bundle of corn or paddy, a string of money. Under the New Year's tree, they placed large jars of wine to invite relatives to the festival.

After the main ceremony, there will be a festival with many unique cultural activities such as dancing, crossbow shooting, martial arts competition, singing, and so on. Participants of the festival must abide by all regulations of the organizing committee. In activities such as dancing, martial arts performances, the young freely show off their talents. Those who don't participate will stand outside applauded, cheered, and cheered for making the festival atmosphere bustling and excited. The night is a perfect time for boys to confess their feelings to girls by the sound of the piano, flute, and singing. 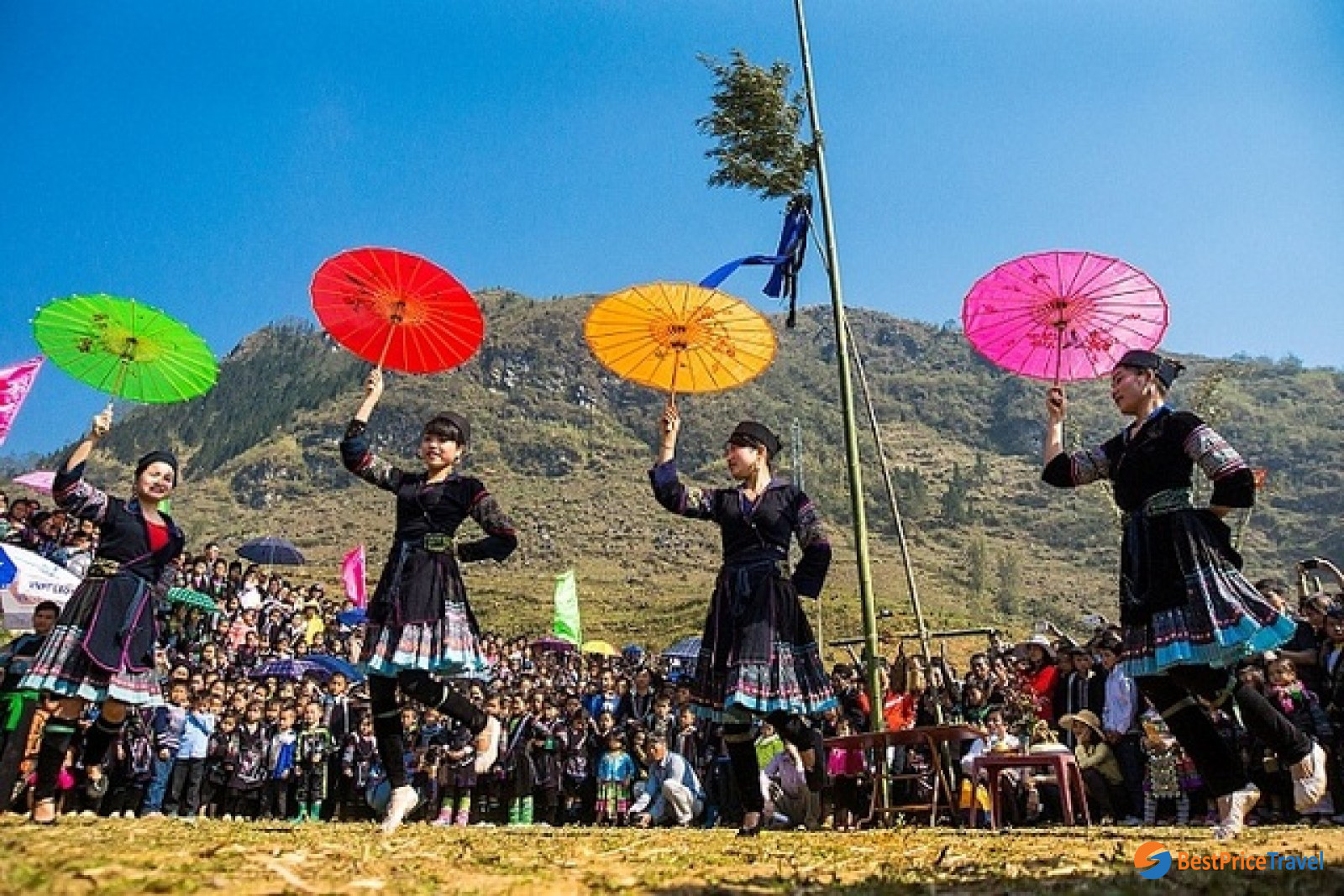 The Girls Dance in The Gau Tao Festival

Coming to the Gau Tao festival, married girls and boys are free to enjoy and find their partners without any strings attached. Everyone is free from all standard life rules so that they can freely live in the atmosphere of the festival. At the end of each contest, couples who sing and dance well will be thanked by their homeowners. The festival usually lasts from 3 to 5 days and then ends, people come back to normal life, but the echo of the festival is still echoing in the minds of those attending the festival.

Gau Tao is a unique festival of the Mong people that has been around for a long time. It is always one of the festivals that still attracts many people to participate in. If you have the opportunity to come to this land of Vietnam, do not miss the opportunity to visit and have fun to know more about the customs of the people here.

You may also like: Come To Sapa In Spring, Never Forget These Amazing Festivals