Come To Sapa In Spring, Never Forget These Amazing Festivals

Located in the northern part of Vietnam, Sapa, with its spectacular views, picturesque terraced rice fields, attracts many tourists annually. And the best time to visit this incredible region is spring. Sapa has its unique features in each season, but coming to Sapa at this time, you not only can admire the beauty of this land but also can take part in many traditional festivals of ethnic minorities.

Nowadays, as globalization is at a fast pace, Vietnamese have added many festivals and holidays to their culture. This makes a culture to be more diverse but also leads to the distraction of some traditional festivals.

Gau Tao Festival is one of a few traditional festivals that are remained until these days of H’mong people. Gau Tao means “recreation place” in H’mong language and this festival will bring a great chance to explore the unique culture of ethnic minorities in Sapa. 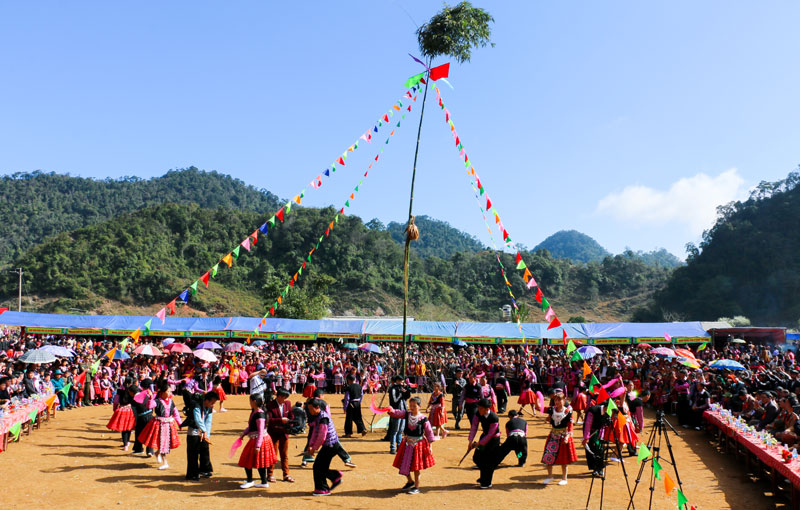 There is a belief that has been existed in H’mong culture for many years: if a family wants more children or wants to be healthy, they can go to Gau Tao hill to pray to their ancestors. Their ancestors will help them to get what they want.

According to the customs, there are 3 families who will host the festival together. It is held in spring for 3 years in a row. 3 years is enough for each family to take turns plant neu tree and get luck from it in every festival. Mong people believe that the Gau Tao festival represents the life of the head of the family. That’s why the head of the family has to prepare a neu tree so to conduct the rituals (including cutting down and plant neu trees).

The Gau Tao festival is held from 2nd to 4th of January of the lunar calendar but the preparation always begins in November of the previous year. The head of the family has to prepare a full tray of food before chopping bamboo to plant a "Neu" tree. The sorcerer (Tru Tao) sings a song to tell the gods the purpose of this festival and find a good bamboo tree for the rituals.

The festival officially begins after the rituals. The chosen families choose a singer. This singer will sing a song to wish the whole family health, luck, and success. After the singer has done singing, all people can join, sing and dance.

In the festival, there are many games such as “con” throwing, lusheng dance, martial arts, bow shooting,… These games are to show off the players’ skills. Many young unmarried men and women take part in these games not only to relax but also to look for a partner. The festival lasts for 3 days. After that, the host will announce the end of the festival before walking counter-clockwise around the tree and singing the song to lay it down.

Roong Pooc festival is held on the first Dragon Day after the first full moon annually. Roong Pooc is a traditional festival of Giay people at Ta Van commune, Sapa district. This festival aims at showing people’s gratitude towards their guardians. On its very first day, Roong Pooc was just held in the Giay community but now it has spread among Muong Hoa valley and become a famous festival of Sapa.

In the early morning, there are flows of people coming to the festival cheerfully and enthusiastically. All ethnic minorities have their own traditional clothes so that you can easily realize that there are Mong people from Hau Thao, Lao Cai, Yao people from Ho and Phung mountain, and many tourists from downtown Sapa.

This festival is held to hope for a secure life, abundant harvest, favorable weather, good health for people. The most ideal place to hold the festival is the flat field at the end of the village. There is a pillar with a circle board on top. One side of the pillar is glued with a red piece of paper (resemble the sun) and the other side is glued with a yellow one (resemble the moon). 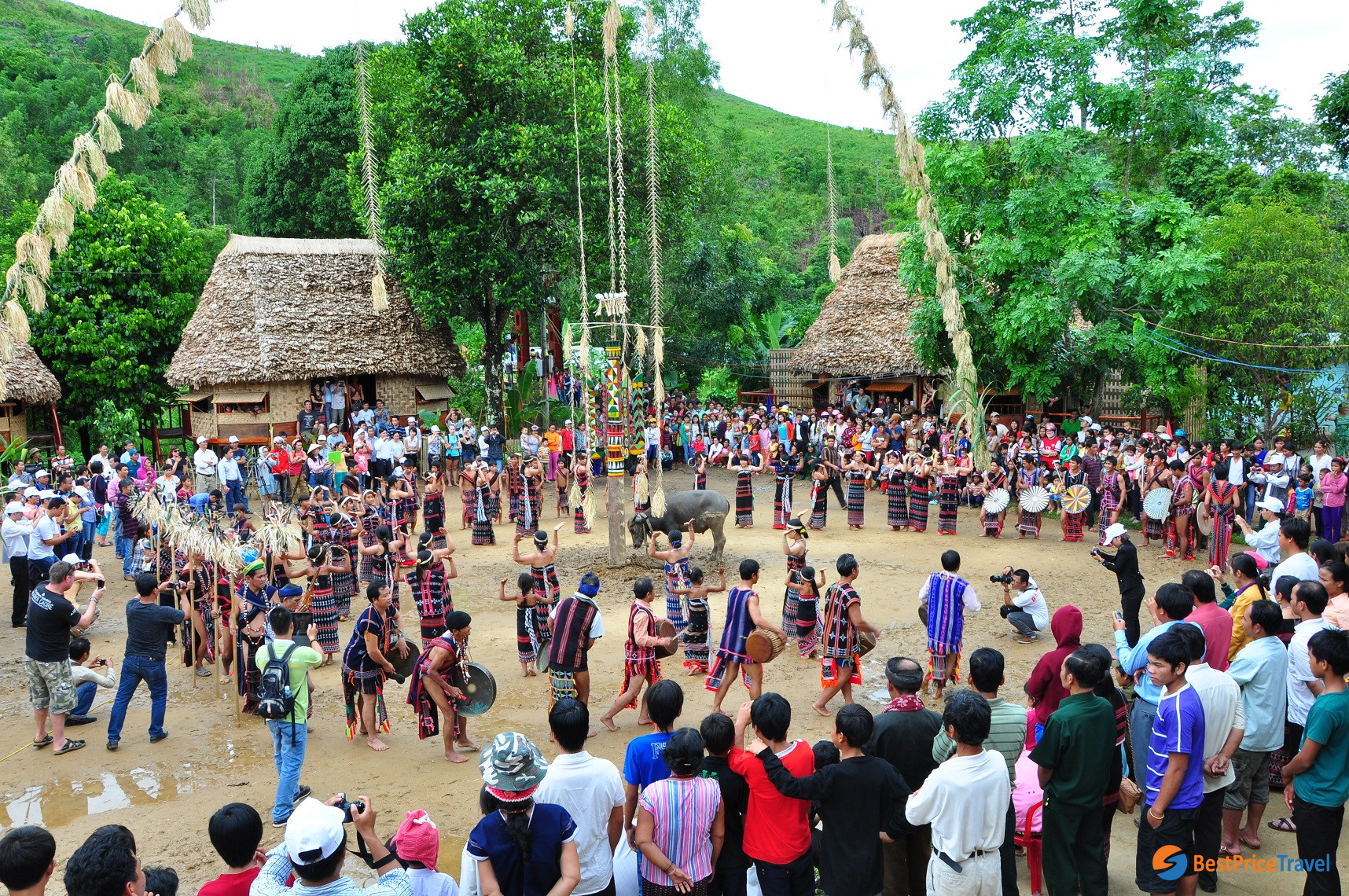 People put the offerings on the altar, including cloths, eggs, bamboo shoots, silver, and 6 colorful balls. After that, an elder will burn incense sticks and send prayers towards deities for all the best things in life, including health, property, happiness, peace,… The sacred ceremony will end with the harmony of drums, gongs, and Pi Le clarinets. And now, come to the next part: traditional games.

The festival starts with the "Con" throwing game. The predecessor of the village will go first, then males and females will follow. They stand in 2 lines, throwing 6 colorful balls into the air. The other traditional games include catching goats while blindfolded, going a bamboo bridge over a stream, etc.

The courtship duets festival is the traditional festival of the Red Dao ethnic group in Ta Phin which is 12 km from Sapa town. This festival, with the main activity: singing, attracts many people to come and admire the folk belonging to the Red Dao. The courtship festival is held by hardworking boys and girls. Normally, they are good at making wedding dresses and brocade products for tourists as souvenirs for relatives. 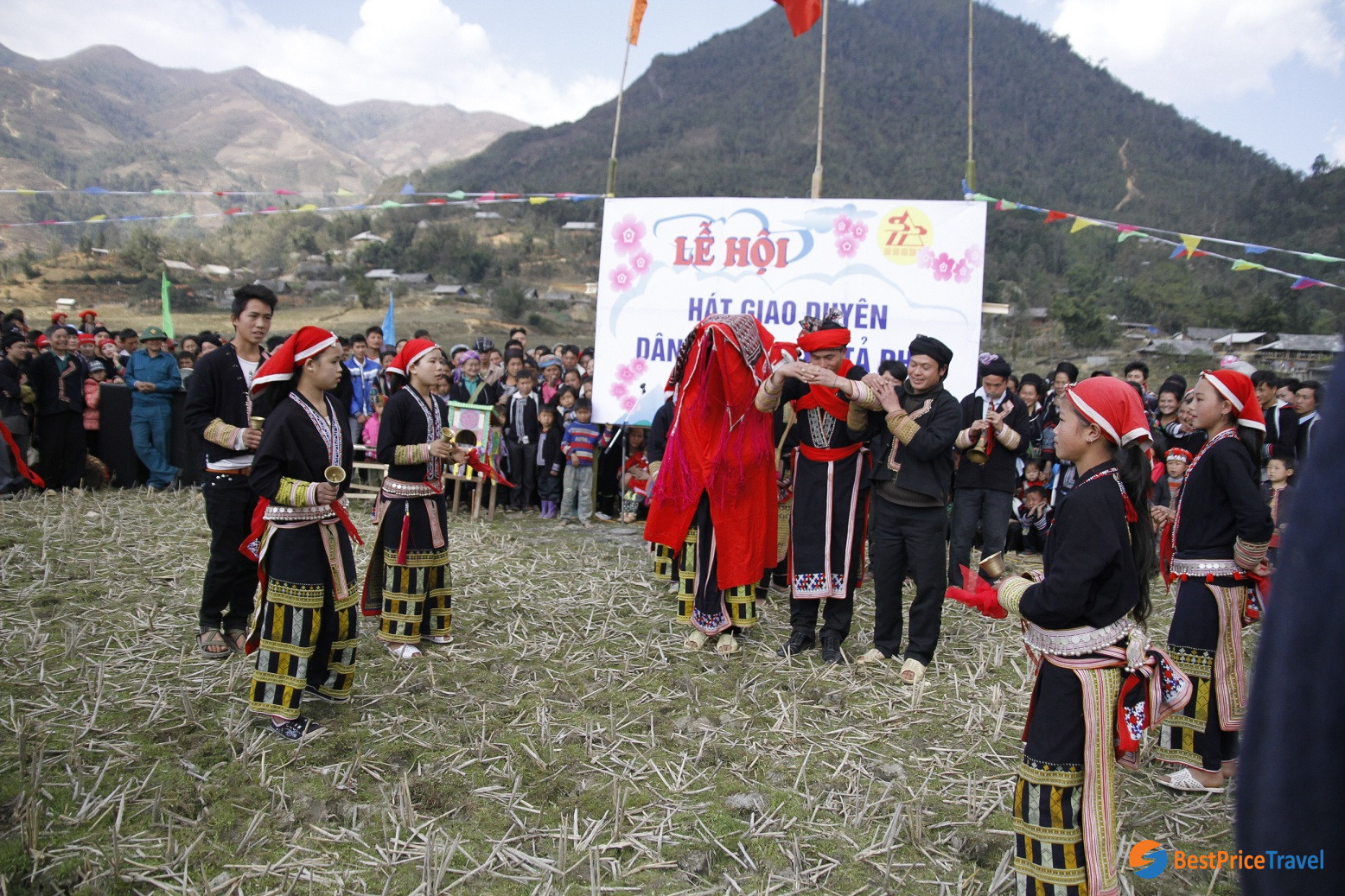 At the festival, young and unmarried men and women will take part in singing to find their partners. People believe that through their songs, young men and women will become husbands and wives. Moreover, during the festival, there are many traditional games, such as throwing a sacred ball through the ring, crossbow contests, pushing a cane, tug of war, pole climbing, or blind man’s bluff,…

Sapa is an escape from all your busy working day. Coming to Sapa and admiring the breathtaking scenery here as well as discovering unique customs through traditional festivals of ethnic minorities.