How to getting to & around Hoi An

Within 10km of the UNESCO World Heritage Site, there are numerous natural sites to see, including pristine beaches, local communities, and beautiful mountains, many of which require the use of a vehicle. We've put together a handy guide to Hoi An transit for a stress-free vacation.

Getting around Hoi An

Due to its compact size, abundant pedestrian lanes, and affordable public transit, getting around Hoi An is quite convenient compared to other cities in Vietnam. Hoi An Ancient Town's major sights, restaurants, pubs, and shops are all conveniently accessible by foot, cyclo, or bicycle, and more.

Taxis in Hoi An are fairly inexpensive and credible, not to mention, the drivers are fairly genuine. Mai Linh Taxi and Faifoo Taxi are the two most reputable companies which you can call their number, respectively +84 (0) 235 3914 914 and +84 (0) 235 3919 191. Or you can easily find the taxi widely available outside of Hoi An ancient town, particularly at the corner of Tran Hung Dao and Le Loi street.

There is nothing better than exploring the old town of Hoi An by taking a cyclo. The cyclo is a three-wheel bicycle taxi that appeared in Vietnam during the French colonial period after a failed attempt to introduce rickshaws. The greatest time to visit is early evening when the sun sets and the town changes into a wonderland of vividly coloured lanterns.

You should ask the price in advance and negotiate a lower price. Depending on your negotiating skills, a 15 to 20 minutes tour of the Old Town costs around 150,000 VND ($6.5)  - 200,000 VND ($8.7). In order to be sure about the price and to avoid any scams that might happen, negotiate until you reach an agreement on a price, note it down, and confirm again!

Scooters or motorbike taxis are perfect to explore the regional area and vast shoreline. Similar to taking a cyclo, remember to ask and haggling to get a better price before getting on. For a short trip around the town, you shouldn’t need to pay more than 30,000 VND ($1.3). For trips from Hoi An centre to An Bang or Cua Dai beaches the cost is around 40,000 VND ($1.7).

Hoi An is flat and tiny so it’s simple to get from place to place on a bike. In addition, Hoi An ancient town is a bicycle-friendly city and the Old town is closed off to cars, taxis, and motorbikes making it even easier to go into the centre. Besides, A bicycle will provide you with easy access to the seasides as well as the opportunity to explore the picturesque countryside.

Many hotels, hostels, and homestays provide guests with complimentary bicycles. Some of them do offer bicycle rentals at slightly the same price as other stores. The rental fee is around 25,000VND ($1.09) to 30,000 VND ($1.3) per day. There are also electric bikes available to rent, suitable for people who don’t want to move a muscle or those who are not sure about their motorbike ability. The price of electric bike rental for a day is about 60,000VND ($2.6) to 70,000 VND ($3.04). When renting bicycles, don’t forget to check them before going, especially tires and brakes. Don’t worry about pointing out the issues as they will be happy to fix them.

Popular routes to Hoi  An

Hanoi to Hoi An

Coming from the frenzied city of Hanoi to the more laid-back town of Hoi An, you'll be in for a delight – and the journey itself, regardless of the mode of transportation, is breathtakingly gorgeous! The bus and motorbike will take you straight to Hoi An, while the train and aeroplane will take you to Da Nang.

As Hoi An does not have a train station nor its own airport so the closest ones are in Da Nang.  The quickest way to travel with a duration of only 1 hour and 20 minutes. Flights from Hanoi to Da Nang are available many times a day from Vietjet Air, Bamboo Airways, and Jetstar, and can cost as little as $35 USD per person if booked in advance. 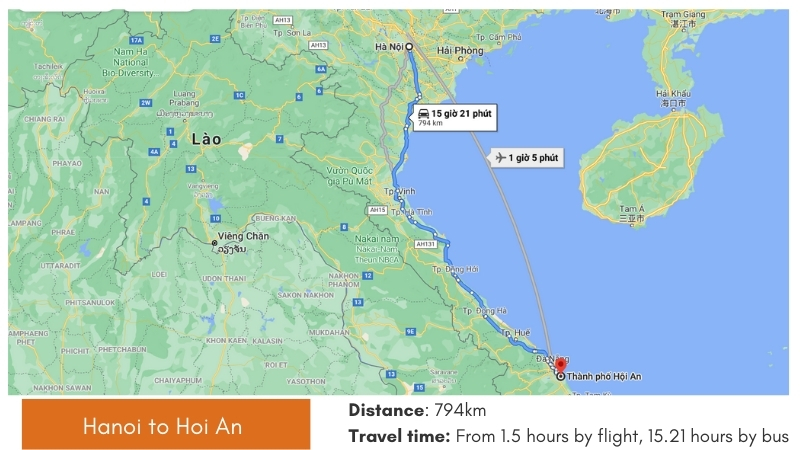 Hue to Hoi An

The distance from Hue to Hoi An is more than 200km away and there are many options for you to choose from, according to your time and budget. Except for the train that will stop in Da Nang, you can travel to Hoi An by tourist bus, shuttle bus, or private car for about 3 hours driving.

Besides those common modes of transportation, travelling from Hue to Hoi An by motorbike is also very popular among locals and travellers. The route taken by the motorbike offers you spectacular views of Hai Van Pass as well as Lang Co Bay along the coastline. There are many companies that offer one-way rentals and transfer your luggage to your accommodation to Hoi An making it convenient to travel. It could take the whole day, based on your break time and stops, yet it is absolutely worth a try. Check out our complete guide for all transportation choices to travel between these cities. 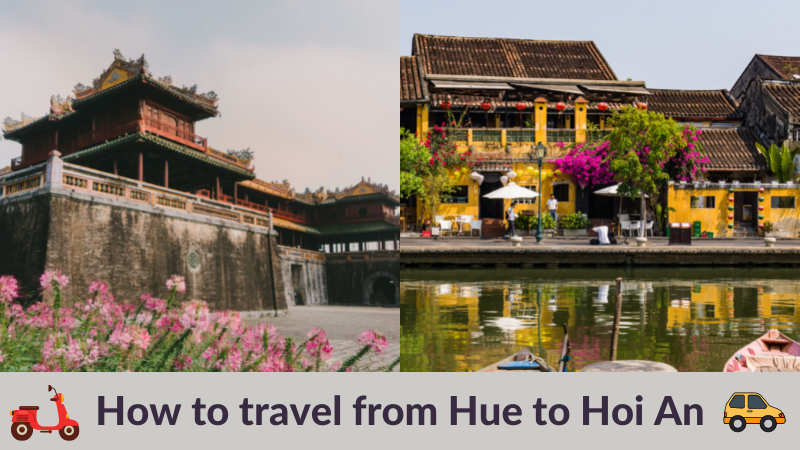 Da Nang to Hoi An

Da Nang is the gateway to Hoi An so wherever you arrive to or depart from, the ways to get there are very simple, easy, and quick. You can either take a local bus which is the cheapest option ($0.9) or a shuttle bus that takes you to the front door of your hotel. There are many taxis hanging out outside of Da Nang airport and railway station so you can also easily catch one. Another option is renting a bike and drive to Hoi An yourself. Besides the local public bus, this is a budget-friendly opinion to travel back and forth as it gives you the opportunity to get around Hoi An as well.

Ho Chi Minh to Hoi An

From the cosmopolitan city of Sai Gon (aka Ho Chi Minh City) to the ancient town of Hoi An is comparable to the Hanoi-Hoi An route. There are three common ways which are by plane, by train, and by bus.

You can also travel by sleeper bus which takes about 21-23 hours. Along this long journey, you can visit other beautiful coastal cities of Vietnam such as Nha Trang or Quy Nhon.

WHICH ROUTE DO YOU WANT TO GO?

Hanoi and Hoian are among the most famous tourist attractions in Vietnam. Many tourists think of Hoian in the center after their travel in and around Hanoi in the north. The first question appears in their mind is how to travel from Hanoi to Hoi An. You can find the answer with the below article, choose the option which is best for you. 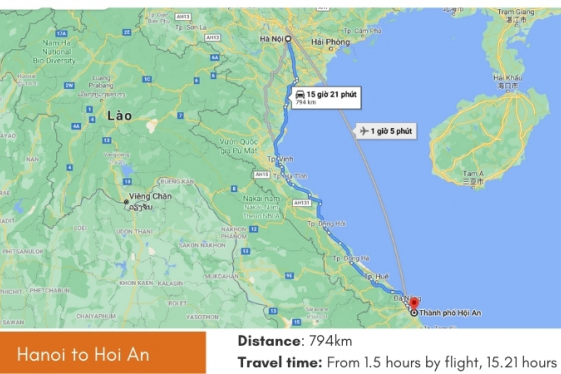 Ho Chi Minh City and Hoi An are 2 of the most outstanding destinations for tourists coming to South and Central Vietnam. If you are planning to visit both of these places, or want to travel to Hoi An from Ho Chi Minh city, this topic will provide you with all the information you need. 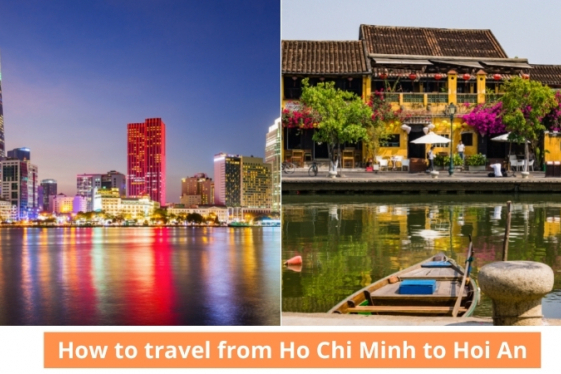 Are you seeking a great way to travel from Hoi An to Nha Trang? Luckily, we provide the best answer in this article. You will find all answer to how long does it take, how far it is, what is the best transportation. Let's start. 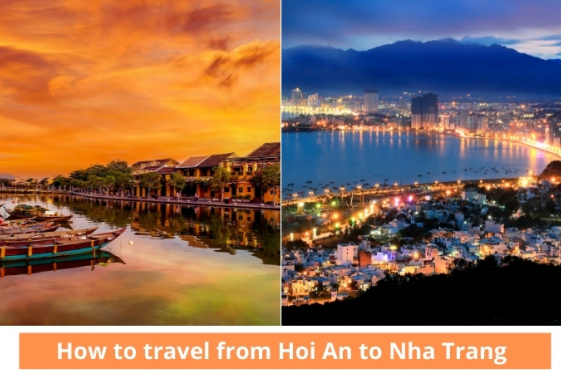 Da Nang is one of the largest cities, most worthy to live in Vietnam and rapidly develop within the country while Hoi An is a tranquil lovely ancient town and voted to be the best city in the world by Travel & Leisure. There are many transfer choices to travel from Da Nang to Hoi An or vice versa and we have listed them out in this article. 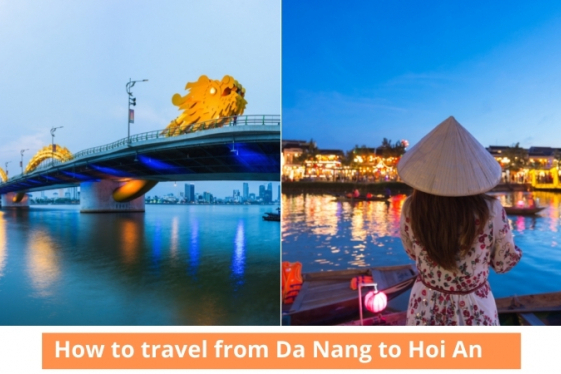 Hue and Hoi An are well-known tourist destinations in Vietnam. Traveling between these cities is quite easy as they are close to each other. Each method of transportation comes with advantages and disadvantages so pick the one that is the most suitable for you to have the best travel experiences. Read along to find out which is the best way to travel from Hue to Hoi An or vice versa. 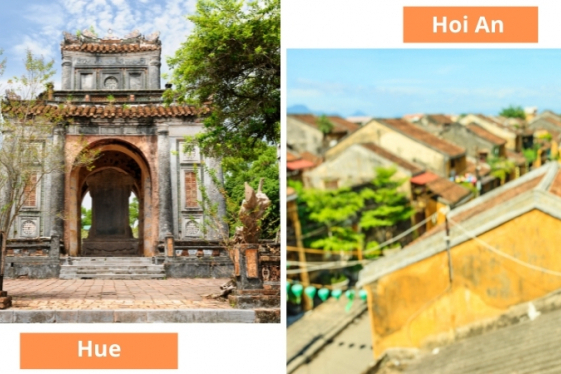 How to travel from Hoi An to Hanoi?
If you are traveling to Vietnam for the first time, it might be tricky for you because…

Hue to Hoi An Train: A Completed Guide
Whether you are travelling in Vietnam from north to south or vice versa, you will…

Hanoi to Hoi An Train: Schedule & Price
Hoi An is a small town in central Vietnam, possessing the beautiful historical heritage,…

Hanoi to Hoi An Bus: Schedule & Price
Hanoi and Hoian are 2 of the most outstanding destinations in Vietnam. Hoi An is…

How to travel from Phong Nha to Hoi An
Phong Nha is overflowing with natural splendor, a combination of intricate cave…

How to Get to Hoi An from Da Nang Airport?
Da Nang is the gateway to Hoi An old town, especially if you are traveling from…

Da Nang to Hoi An By Bus: Local or Shuttle Bus is Better?
Da Nang and Hoi An are located very close to each other making it very convenient…

Hue to Hoi An by Motorbike: All You Need to Know
Hai Van Pass is seen by many as the most scenic coastal route in the world. It became…
See more

All Hoi An Travel Routes