Things To Do At Yen Tu Festival

Yen Tu Pagoda is the Buddhist center of the old Dai Viet, the site of the Truc Lam sect. Visitors coming to the festival of Yen Tu Pagoda are separated from the mundane world, carrying out a religious pilgrimage between majestic nature.

Yen Tu is a system of pagodas, ancient towers, and tree forests that blend with natural scenery scattered from the Red slope to Yen Tu Mountain, Halong. The beautiful scenery at Yen Tu is the magnificence of the mountain in harmony with the old-fashioned features of the systemic towers along with larch, big trees, bamboo, and apricot trees growing on both sides of the road, the shading makes the cross-country tourists forget the sluggish slope.

In the past, people called Yen Tu Mountain as Elephant Mountain because of its shape like a giant elephant. In the history book, Yen Tu is also named Bach Van Son because all year the mountain is submerged in white clouds. 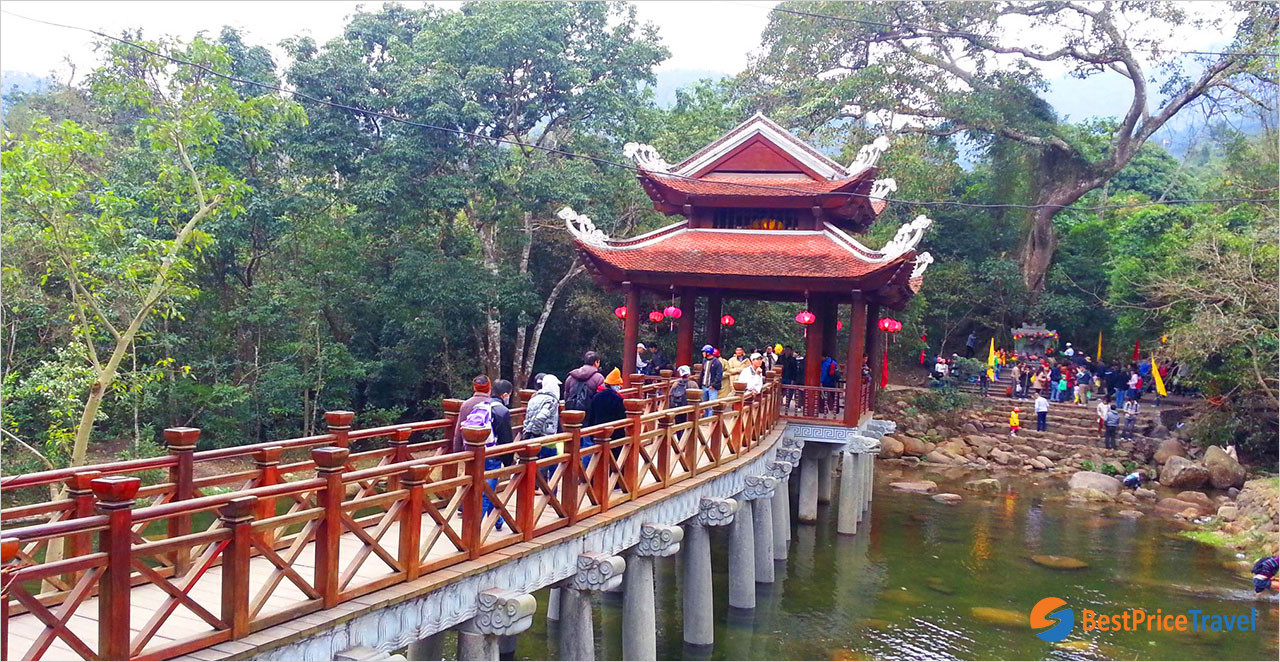 Nearly 1,000 years ago, the historical recorded that Yen Tu was considered the "fourth of Giao Chau's gospel". Especially since the Tran Dynasty, Yen Tu Pagoda has been invested in complex large-scale pagoda architecture. Starting with King Tran Thai Tong to Yen Tu in 1236. Tran Nhan Tong then led the army of resistance soldiers to gain victory over the Nguyen-Mong army, bringing peace to the country, at the time of a peaceful country. The king ceded the throne to his son on Yen Tu Mountain. 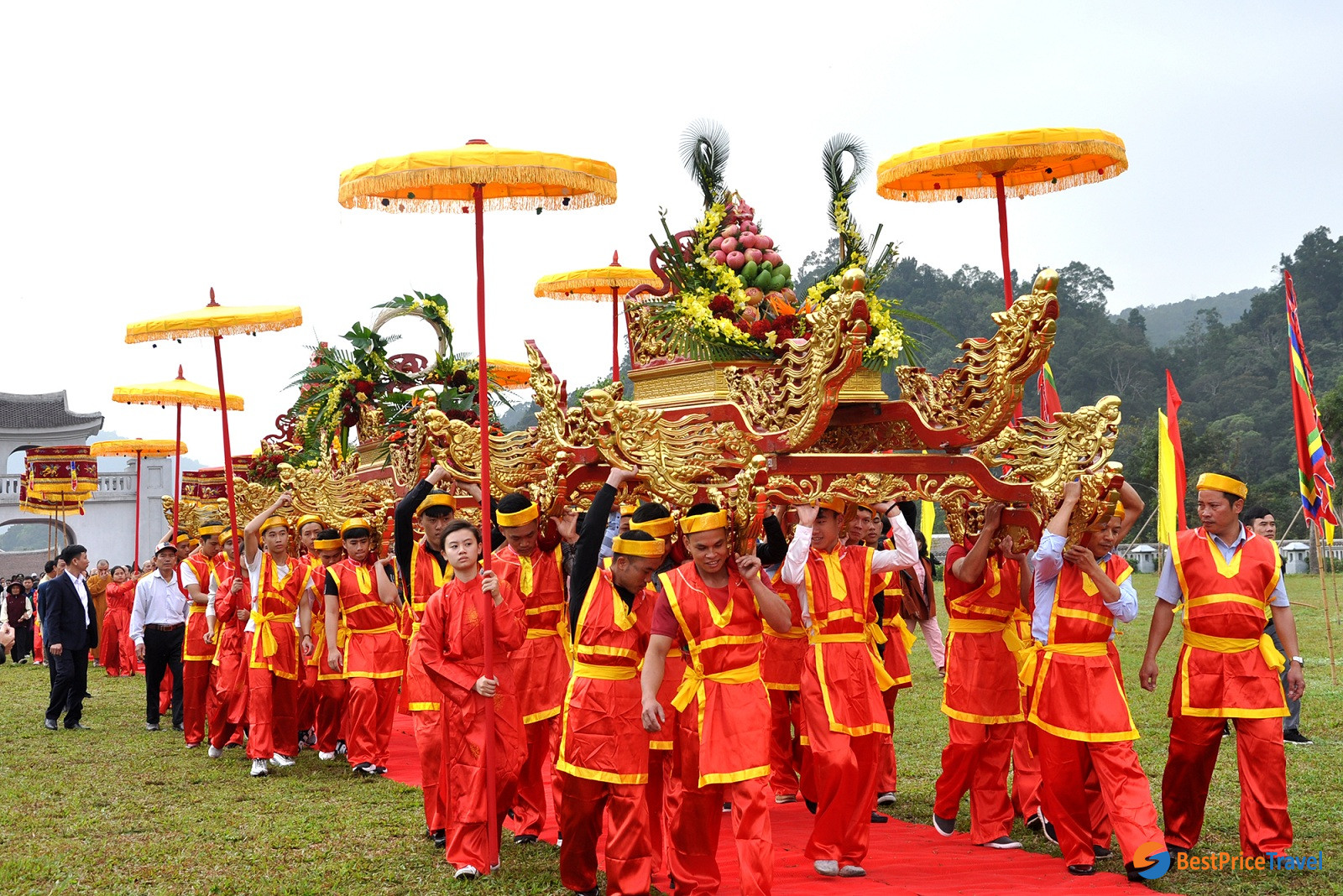 In 1299 (more than 700 years ago), Tran Nhan Tong built Truc Lam meditation with a system of both theory and action associated with life. He is considered to be the first Patriarch of the Truc Lam sect of Buddhism, carrying the Buddha Giac Hoang. His career continued as Master of the Dharma Speaker and Huyen Quang Ton. All three are collectively known as Truc Lam Tam To. Since then, Yen Tu Pagoda became the ideological capital of Truc Lam Buddhism, marking the development of the philosophy and ideology of the Vietnamese people in the 12th, 13th, and 14th centuries.

Not knowing the Yen Tu festival was formed ever since, only knowing that, from the 17th-18th century, on the top of Yen Tu, at a height of 1,068m, a pagoda (Thien Truc Tu) roofed with copper tiles was present. In Yen Tu Pagoda, there are 2 bronze statues, next to the temple is a large flat stone called the Fairy Chess Board along with a large block of Buddha carved into the cliff... All speak of the sacred, mysterious, and energetic magical attraction, the highlight of the beautiful scenery at Yen Tu. 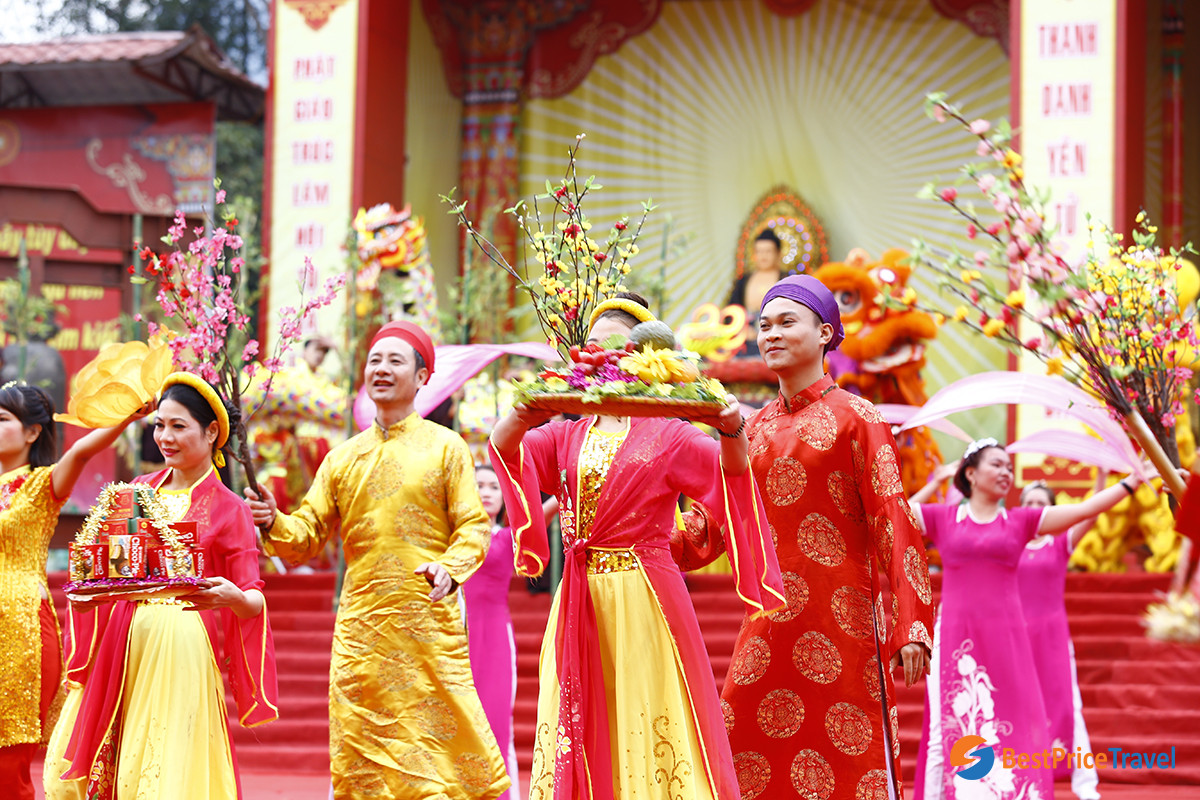 Yen Tu Festival starts on January 9 and lasts all 3 months of spring every year at Yen Tu Pagoda in the Yen Tu Mountain area (Quang Ninh province). The festival is to honor the merit of Lord Tran Nhan Tong. He was the third king of the Tran dynasty to practice on Yen Tu Mountain and was the founder of Truc Lam Zen monastery.

The main things to do in Halong Bay are mostly sightseeing the wonderful scenery at Yen Tu. Not only Yen Tu Pagoda but also the surrounding pagoda is extremely beautiful. Above all, Giai Oan Lake has a 10m long bridge, there is no elaborated architecture but exudes an ancient look. This is the place for King Tran Nhan Tong to build to unjustly assert the frequency and beauty for his sake. In front of the pagoda, each group of horns of a yellow nest and white color, around the pagoda has 6 towers with the largest being the tomb of King Tran Nhan Tong. 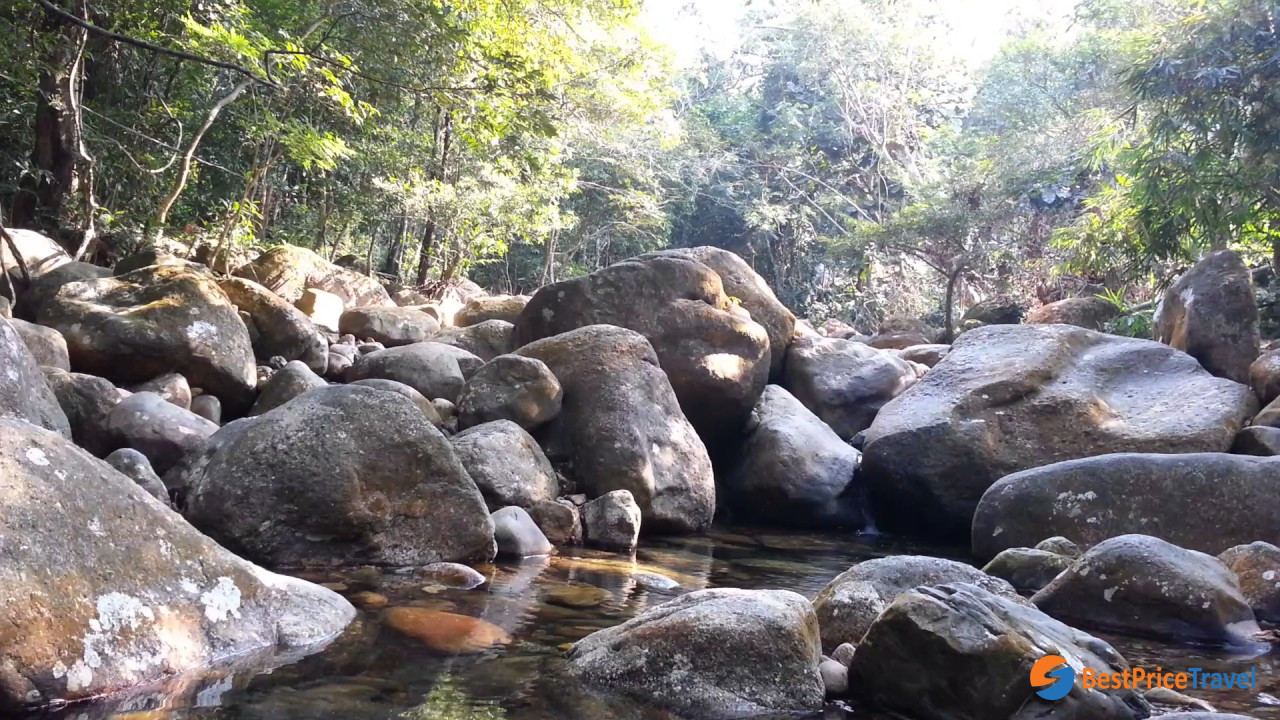 Next is Giai Oan Pagoda, also known as Ha Pagoda, one of the three main pagodas on Yen Tu Mountain (Trung pagoda is Hoa Yen pagoda; Thuong pagoda is Dong pagoda). Giai Oan Pagoda is the first temple in the journey to conquer Yen Tu, with a "nail" shaped structure, consisting of 5 spaces and a harem. And Hoa Yen Pagoda Or called Ca pagoda, Phu Van pagoda. Located at an altitude of 543m, with many rows of ancient pine trees, planted from the time King Nhan Tong went to practice Yen Tu. One-roof pagoda, this temple has an architecture consisting of three spaces, corresponding to three altars, including the altar of worship, the Tam Bao altar, and the inner rear altar lower than the two outer boards. Here, the legend of "milk flow" and "rice dunes" are preserved. 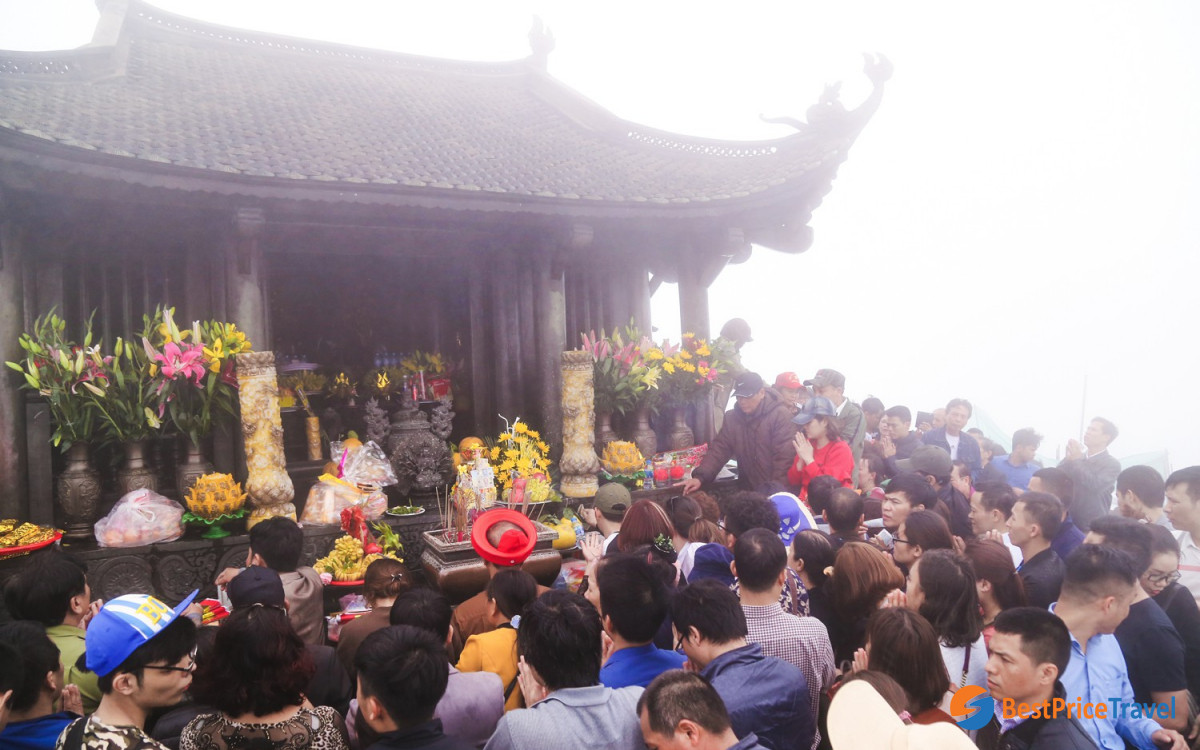 There is also Dong Pagoda located at a height of 1,068m, it was built during the Hau Le Dynasty under the name Thien Truc Tu. Today the temple has been restored and greatly restored. The pagoda was cast in pure copper with a length of 4.6m, a width of 3.6m, a height of 3.35m, and a weight of over 70 tons. It is like a lotus worshiping Buddha Shakyamuni and three Truc Lam sects.

Truc Lam Yen Tu Monastery is a place for monks and laypeople to study. As a university, this is not a place of worship but you can visit it before climbing. Hue Quang Tower is a place to store a relic of King Tran Nhan Tong, the rest is worshiped at Tran Temple in Nam Dinh. A Ky Sinh and the statue of Emperor Tran Nhan Tong is a statue of a monk petrified and a huge bronze Buddha statue.

Coming to Yen Tu Festival, tourists will not only contemplate the impressive landscapes but also the excitement at Yen Tu Pagoda. Find out more details about Halong tours with BestPrice Travel.