Winter is coming! The North of Vietnam is the coldest area in the winter that means this area owns the most diverse cuisine for winter time. Let's firgue out top must-try Vietnamese dishes in winter.

In Hanoi – the heart of Vietnam, it has started to be cold already. As the winter in Vietnam is from November till early February; with many people, the November can be considered as the most uncomfortable month in winter. This month, it may be hot and cold in only one day, no one knows exactly what they should wear when go outside every day, whether it will be a coat, sweat or only T-shirt. However, these days Vietnamese know exactly what they should eat, not only in this November but also throughout the winter.

Many tourists have heard about Pho and there are many Vietnamese restaurants selling Pho around the world now. However, most of foreigners only know about Southern Pho, Pho in the North of Vietnam tastes totally different. The best Northern Pho can be found in Hanoi – Vietnam’s Capital where Pho became a specialty here. In fact, it is believed that Pho was born in the North of Vietnam and became a traditional dish in Hanoi. If you come to the Capital in a winter day, you should have at least one breakfast with Pho, the hot, luscious, slightly salty broth and special delicious smell of Pho here are so addictive. 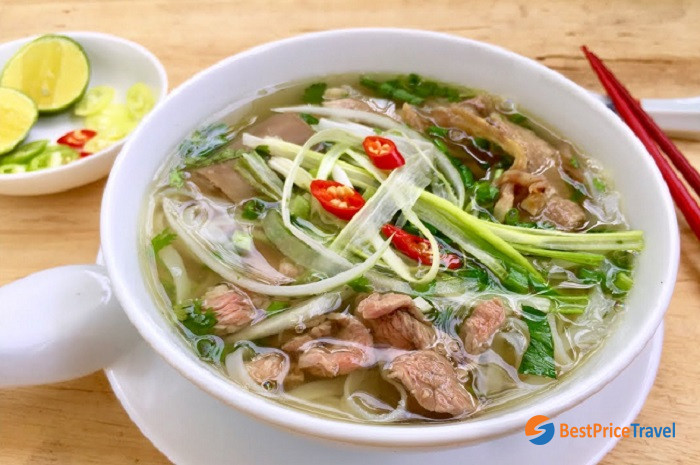 On the other hand, not only Pho, Vietnam has so many traditional noodles and the Capital is not the exclusive place for nice food. These years, Hai Phong – the biggest port city in the North of Vietnam is rising as the new cuisine center in this area. Hai Phong owns a wide range of hot dishes for winter. Talking about noodles, no one can ignore the most popular dish that was created in this city: Banh da cua – Red noodles with crab paste. Red noodle is twice – third times bigger and thicker than Pho noodle, combine with crab paste which is made by field-crab meat and egg sautéed with Asian onion; besides, the broth is cooked from pork bones and uses annatto oil to create the beautiful ruby-red color. One more special thing about this dish is that it can be hot in longer time than many other types of noodles which make it becomes more suitable with the cold winter than the traditional Pho. 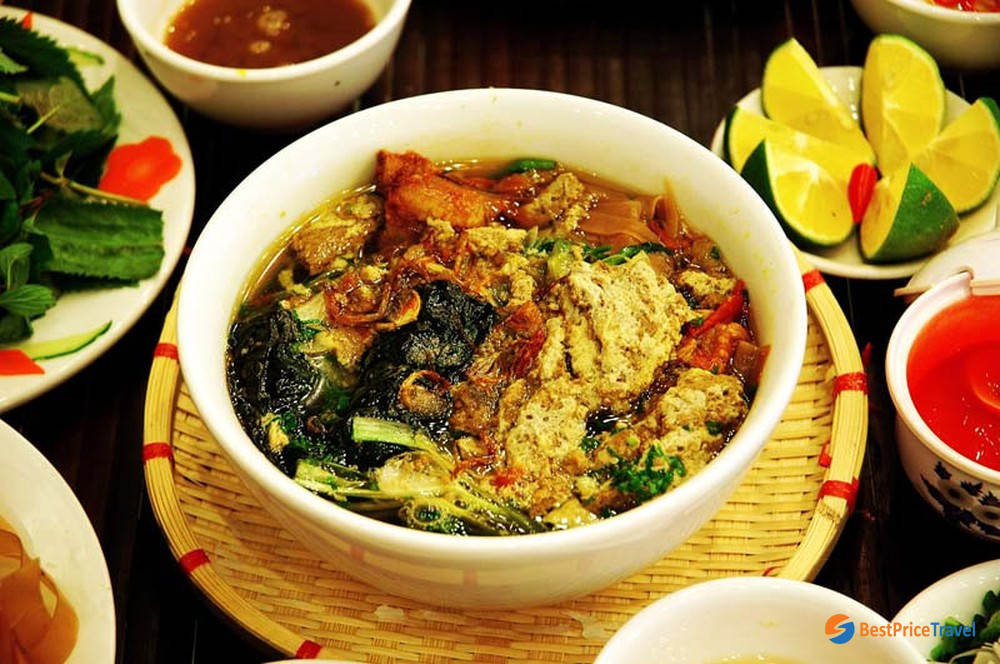 Coming back with the Capital – the tourism center of Northern Vietnam, there is a favorite traditional dish of both domestic and foreign tourists in winter day called pyramidal rice dumpling or in Vietnamese it is “Banh gio nong” or “banh gio”. This dish is made from rice flour with minced pork, mushroom, wood ear, Asian onion, all are covered by banana leafs and steamed until fully cooked. Normally, “banh gio” is served with some pickles and a little chili sauce; however, with someone who can eat more, they can order the seller to add some sausages and “gio lua” (lean pork paste). “Banh gio” is suitable to enjoy at any time in day but people usually eat it for breakfast or late afternoon snack. 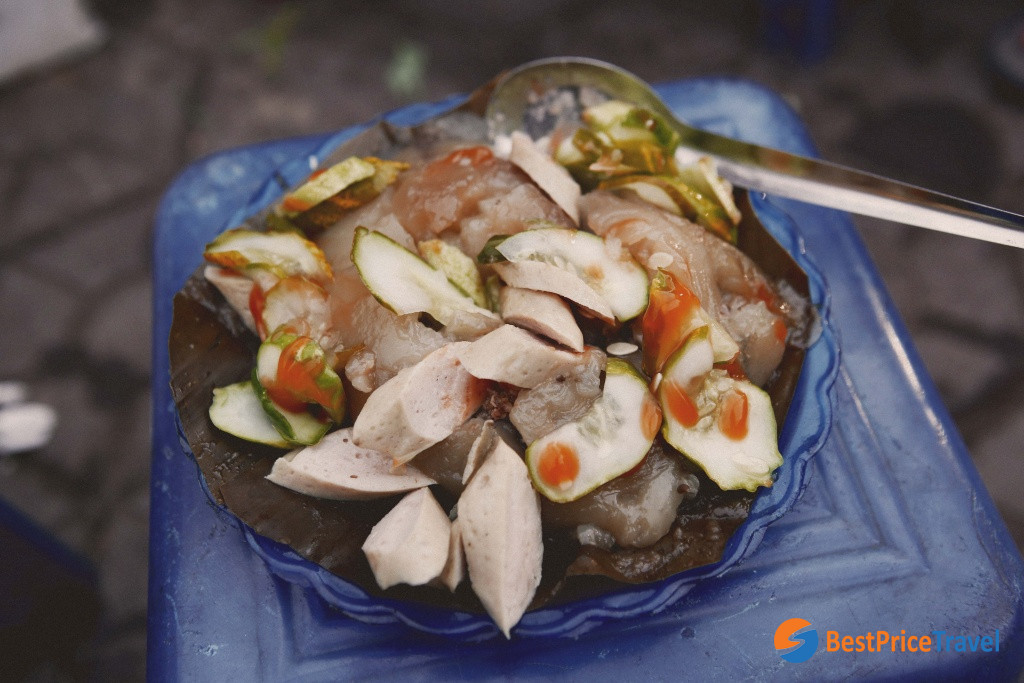 Have you ever been in Sapa? Nowadays, when you wandering about Sapa town center, there are many vendors selling grilled meat and sausage. However, many years ago, when Sapa still was a silent mountainous town in the North, the only street food which tourist can find here are grill corn, sweet potato and egg. At present, although these simple winter street foods appear in many areas in Northern Vietnam, a lot of people still believe that the best place to enjoy them is in Sapa town and at a really cold winter night. There is nothing complicated with these street foods, they are just simply some corns, sweet potatoes and eggs grill directly on the charcoal flame. The feeling of gathering around a small flame, eating somethings hot and easy to hold inside a couple of hands, chatting and even drinking a little corn wine, can warm not only the body but also the heart of many people. 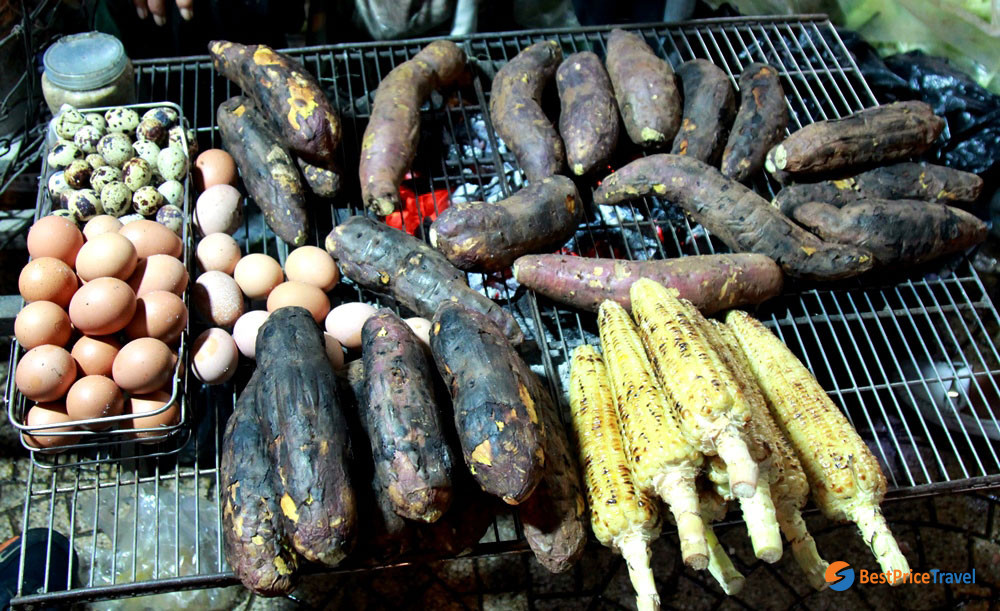 Talking about the mountainous area, there is a famous traditional dish of the ethnic minorities here called “Thang Co”. This dish can be considered as a huge challenge for not only foreigners but also domestic tourists thanks to its special smell. “Thang Co” is a type of soup made from horseflesh and normally sold in weekly fair in Northern mountainous area. Cooking “Thang Co” is quite simple, horseflesh is put in to a giant pan with herbs, spices and water then boil for hours until the horseflesh becomes so soft. While eating this dish, people (especially the men) usually enjoy it with some glasses of corn wine – the traditional wine made from corn of the locals here.

“Thang Co” is not the dish that can be suitable with everyone’s tastes. However, with the locals “Thang Co” is not only a dish for eating but also a part of their culture as they usually gather around the hot “Thang Co” pan, drink alcohol and share about their daily life, jobs and plans for the next farming season. 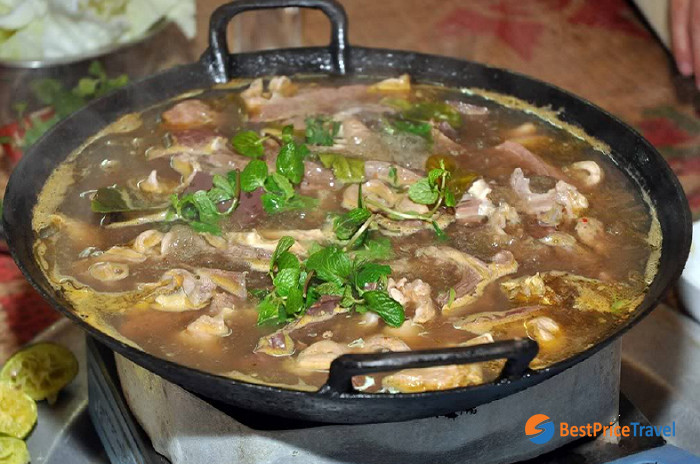 You have seen enough main dish and need something sweet to balance? Sweet soup is here as the desert for you. Sweet soup is a part of traditional cuisine in Vietnam and the Northern people here love hot sweet soup so much in winter as they can be an amazing snack in the late afternoon or mid-night or a perfect desert after main meals.

Mentioning about sweet soup in winter, rice ball sweet soup should be considered as the most popular one. Many people fond of the interesting chewy rice ball made from rice-flour and green bean powder insides, but the most importance thing of this dish is its soup which is cooked from water, a lot of ginger and brown sugar. In Asian ancient medicine, it is believed that this sweet soup is very good for health and it has been used for keeping warm and protecting human’s throat and lungs for thousand years. 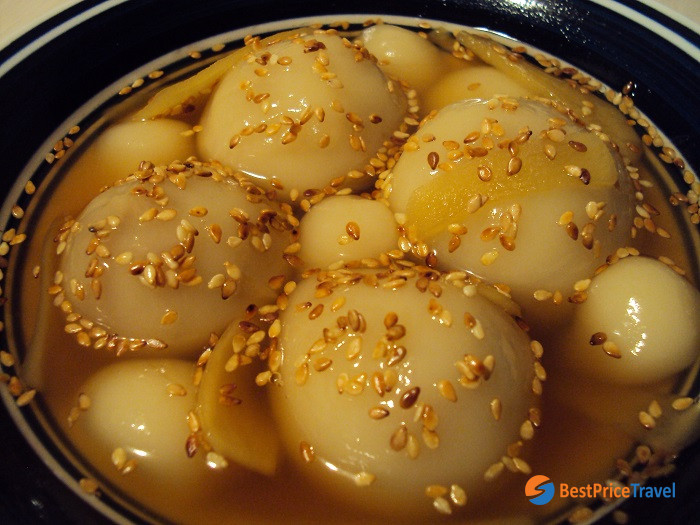 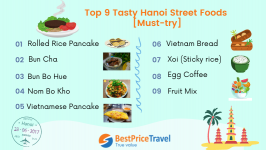 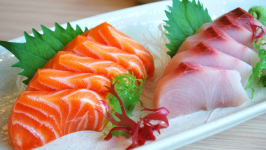 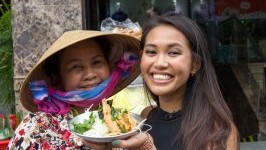 Luxury Train Vietnam - A Special Experience You Should Try Once