The spiritual world has always been a part of spiritual life in every country. With adoration and gratitude to their gods, each country tries to build the most sacred place of worship with unique architecture. It's true with the case of Siem Reap, Cambodia.

Thanks to unique architecture and thrilling historical legends, the following ancient and famous temples in Siem Reap have always become the top tourist attractions.

Angkor Wat is not only at the top of the 10 Ancient Temples in Cambodia, but it is also the largest religious monument globally. Thanks to great cultural and architectural value, the complex has become the country's pride for the region and worldwide. Its position deep in the jungle has been forgotten and seems out of the flow of time. Not until the 18th century did a French explorer discover this magnificent temple complex.

The layout of this theme is quite confusing for first-timers to visit. The temple area consists of 4 floors, more than 400 rooms with stone carving art on the ceiling, and corridors. All of them show the ancient Khmer's extraordinary strength and skillful hands.

The most remarkable thing about the temple that makes it recognized as a wonder of the world is the entire structure built of sandstone and honeycomb. People stacked all those big blocks of rock on top of each other without any adhesive. But Angkor Wat can still stand proudly now, and it is indeed a miracle in the construction of the ancient Khmer.

If you have enough time, you should spend at least two or three days discovering Angkor Wat to contemplate the beauty and exciting things hidden deep inside, as this complex is enormous. 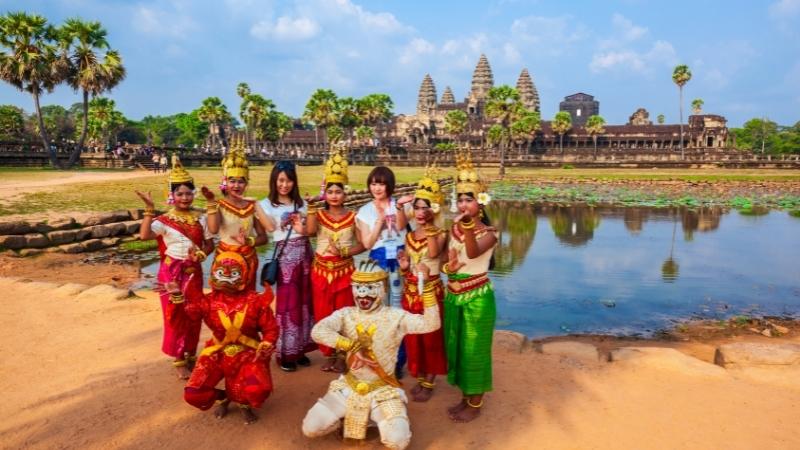 Besides Angkor Wat, there are many things else that Siem Reap has to offer you!

Ta Prohm is a ruined temple almost entirely in the Angkor Wat complex. However, the site is famous and attractive to tourists due to the roots of trees clinging to the rock like giant pythons. Located to the East of Angkor Thom, King Jayavarman VII built this temple in 1186 as a monastery and school of Mahayana Buddhism.

With the ancient rice trees growing through the cliffs and pouring roots covering the outside of the temple wall, visitors often like Ta Prohm Temple to a scene taken from a fairy tale. Anyone who comes to Ta Prohm feels that the decay over time only adds to the enchanting atmosphere. Ta Prohm consists of 3 separate areas and 39 towers, and many window types. The temple is a large building with functional rooms and different courtyards.

The best time to feel the full beauty of Ta Prohm is usually early dawn when there are only a few tourists. The weird feeling in the scene of the ruined towers will be an unforgettable experience for your travel journey. Spend at least a few hours to appreciate the elaborate carvings covering all temple sides fully. 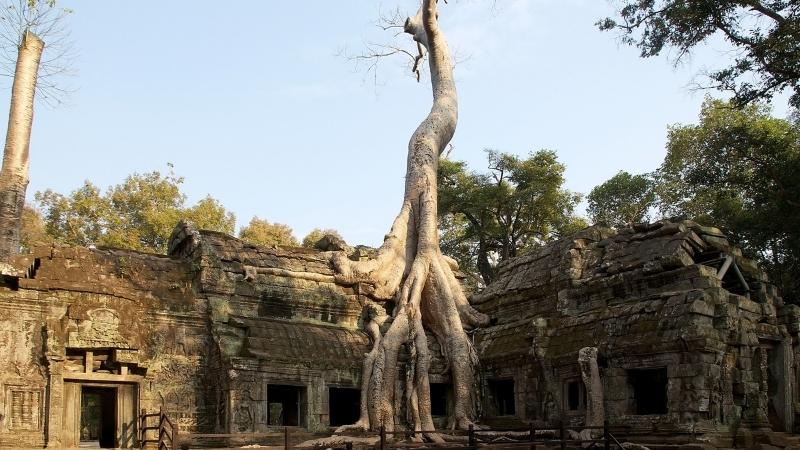 Located in the center of Angkor Thom, King Jayavarman VII built Bayon Temple in the 12th and early 13th centuries. Bayon Temple is considered one of the architectural Siem reap temples of Cambodia.

With the effects of time, many of the temple's structures have been worn down and dilapidated. The temple has an area of about 9 square kilometers, not surrounded by walls. The temple's construction consists of 3 floors, and Angkor ancient artists designed the lower two floors in a square shape with countless bas-reliefs on the wall. Circular shape with many towers arranged on the top floor.

The content of reliefs depicts famous battles, history, parades of the King, or daily activities of the people. There is also a gallery, library, and terrace in baroque-style architecture. It is entirely different from the classical school of the Angkor complex. The faces on the temple's statues are still the subject of interest for many tourists and archaeologists.

Bayon is now a place of worship, and sightseeing should not be a miss for tourists coming to Siem Reap, Cambodia. And along with Angkor Wat, this monument was recognized by UNESCO as a World Heritage Site in 1992. 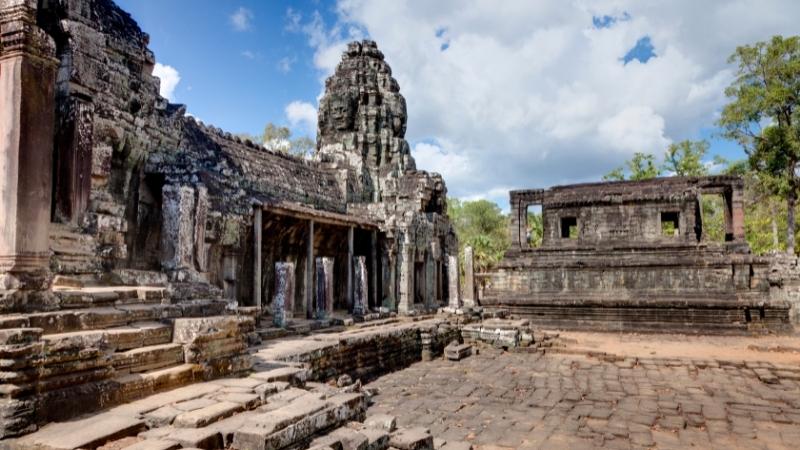 Preah Khan temple complex is located alone in the middle of the old forest, bordering the two provinces of Preah Vihear and Kompong Thom. Along with Bayon and Angkor Thom, the Preah Khan temple is a bold Buddhist architecture built in the 12th century by the only King of the Angkor empire to show his devotion to Buddhism - King Jayavarman VII. This temple was his temporary residence while constructing Angkor Thom.

Today, Preah Khan's name is extraordinary and almost absent from the list of temples to visit by ordinary tourists on the tourist map. The reason is that Preah Khan has been forgotten in the jungle for centuries and covered with old trees full of unexploded minefields.

When going deep inside, you can see that the sculptures were chiseled away, and the walls collapsed, making Preah Khan strange. However, before those ruins, visitors still recognized the statues of Shiva and Buddha’s images scattered everywhere in the temple. 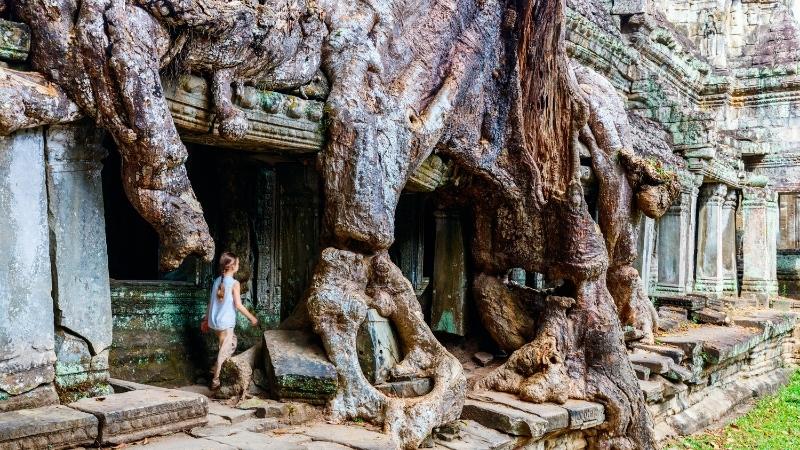 Banteay Srei is a temple for nuns and belongs to the Angkor Thom complex. The temple is surrounded by a moat hundreds of kilometers long in the middle of the dark jungle and then straight to the Mekong River.

This temple was built quite a long time ago, in the 10th century under King Jayavarman V, which means it has existed for nearly 1000 years. This temple worshiped the Hindu god Shiva at the time of its construction. But later, due to its remote geographical position, this temple led to being forgotten in the deep forest. It was not until 1914 that a Frenchman discovered the Banteay Srei temple, and since then, it has been one of the best places to visit in Siem Reap.

Banteay Srei Temple is known as a jewel of Angkorian art. It's by being a masterpiece of laterite and red sandstone sculpture, colorants in addition to decorative wall sculptures. The whole temple is the pinnacle of rock art with delicate and skillful reliefs.

You should spend from 4 hours to 1 day fully exploring the temple's monuments, sights, and cultural spots. 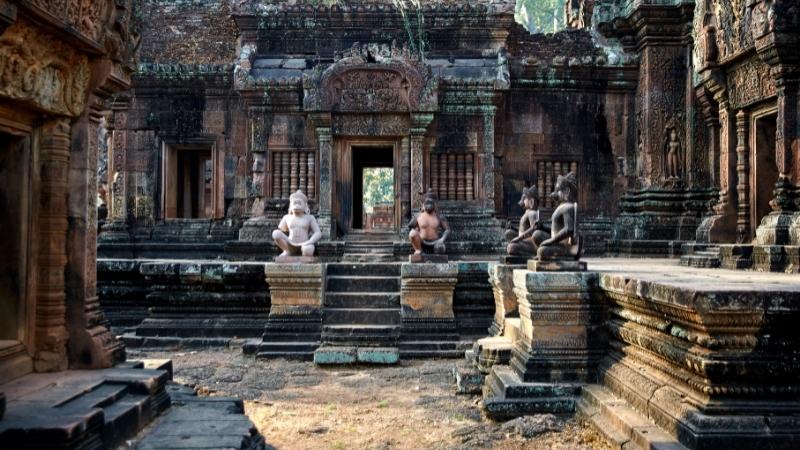 For those inquiring about the Best Siem Reap Tours in 2022, let's check the rates and availability at BestPrice Travel!

Pre Rup is a temple located in the ruins of Angkor - Siem Reap province. The temple was built as the national shrine of King Rajendravarman in 961 and 962 and used as a place to cremate the Royal family's remains.

This temple-mountain architecture was a combination of brick, laterite, and sandstone building materials. The doors are carved beautifully and delicately with increasing levels, and it is also a place that offers visitors an excellent view of the surrounding countryside. The carving details are varied and elaborate, well preserved and preserved.

Many people suppose a temple is a place for funerals, but in reality, it belongs to people's recognition of King Rajendravarman. The historical importance of the temple is that it was the second temple built after the capital returned to Angkor from Koh Ker.

Located on the way to visit Banteay Srei, the temple is famous to many tourists because of its convenience and ancient features. Please stay there for 1 hour to enjoy the magical atmosphere of Pre Rup-one of the must-see Siem Reap temples! 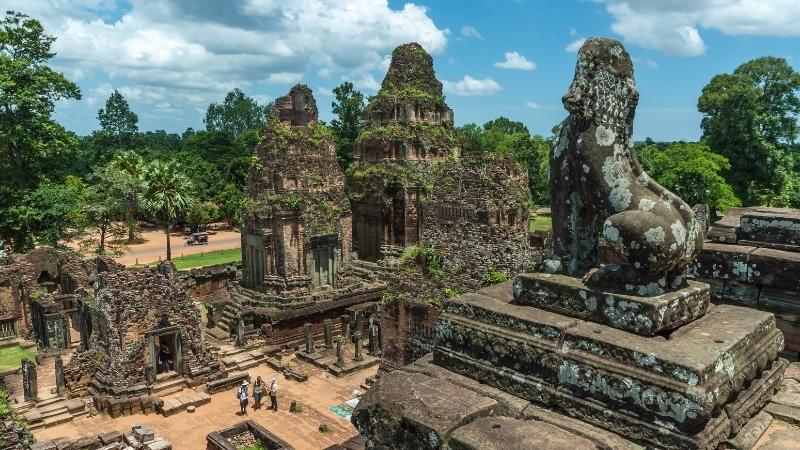 The campus of Pre Rup Temple

Ta Som is located northeast of Angkor Archaeological Park, on the east side of a manufactured lake. Although the temple's entrance was initially from the East, visitors visited Ta Som by passing below the faceted west tower.

In the late 12th century, the great King Javayarman VII built the temple. This temple's purpose is little known, but it may have been dedicated to the King's father or one of his teachers.

Surrounded by a moat and laterite walls, Ta Som Temple has a central tower and two tower gates, the main gate in the East and the second gate in the west. Like Ta Prohm, the site is also not missed when tourists visit Cambodia.

Currently, at the gate of the tower to the East, there is an old wooden tree right on the tower gate, creating the mystery and sacredness of the temple. It has been a background for many poses from tourists! 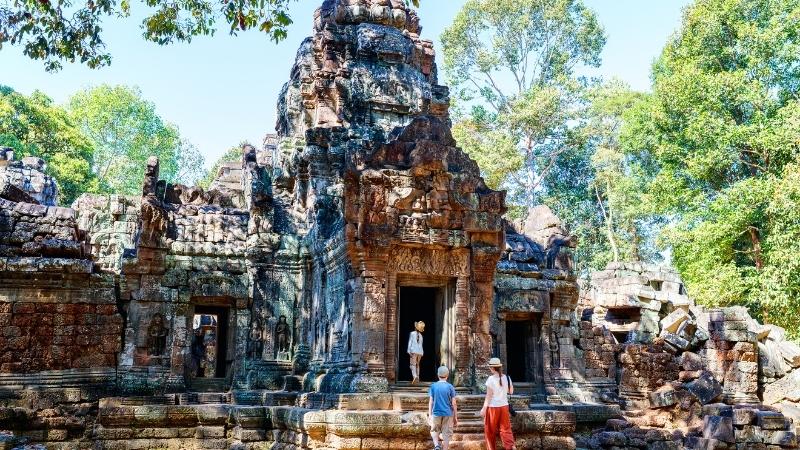 The gate of Ta Som Temple

Phnom Bakheng is a site located between Angkor Wat and Angkor Thom. The temple symbolizes the sacred mountain Meru in Hindu mythology and is the central shrine of the first city at Angkor. Although many towers have deteriorated, Phnom Bakheng is of extraordinary importance.

The entire temple architecture stays on a high hill. Thus the road to the temple is a significant obstacle for those who conquer it. The steep slope of nearly 70 degrees with wild trees and forest cover makes destroying this temple not for tourists afraid of heights. There are many sections to be careful of because it is perilous if you are careless. Those who don't have enough time or stamina can use the elephant riding service up the hill.

Although the road to the top is steep, the temple is a must-see because of its breathtaking beauty. It is the only place seen at the top of Angkor Wat. Bakheng is one of the most must-try temples in Siem Reap! 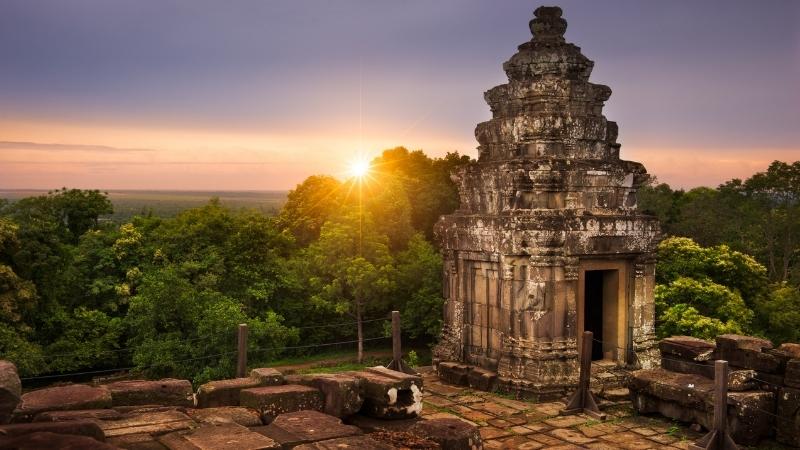 Banteay Samre is a temple in Angkor, Cambodia. Built under King Suryavarman II and Yasovarman II in the early 12th century, it is a Hindu temple in the style of Angkor Wat.

At the corners of the temple, there is no sculpture. The lines carved on the stone are so meticulous that people mistakenly think they were sculpted on an existing template. The principle of building the temple is that the rocks first, then the architects begin to carve. The evidence is that there are still traces of unfinished sculptures on the first floor pillars.

The temple of Banteay Samre is a glorious architectural achievement since it demonstrates a profound level of volume, space, and epochal complexity. 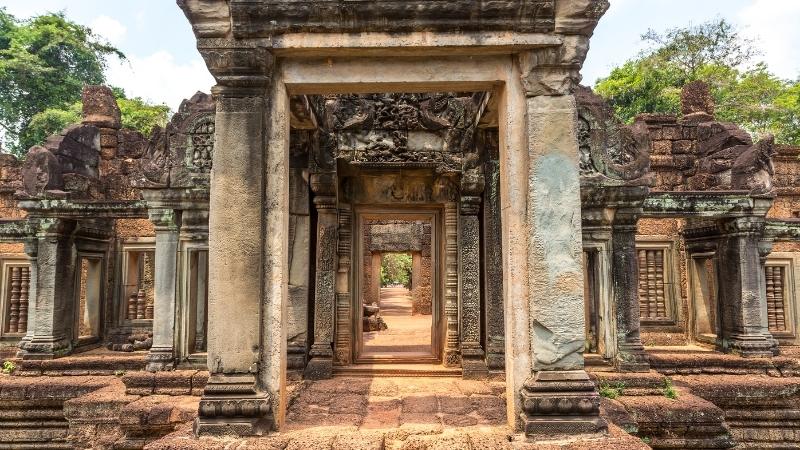 The Prasat Kravan is a small 10th-century temple in the Angkor complex, consisting of five red brick towers on a communal terrace.

Although the temple is relatively small, it is a place worth a visit. It is a Shiva-style temple: Built in the year of 921, the five east-facing Spiers line up in a row. The walls are engraved beautifully with a Vishnu theme inside the central tower.

The temple's structure is different from other temples because of not built by royalty; its location is far from the center of Angkor.

Temples are a place for people to calm down and ask God to bring good luck and peace to themselves and their loved ones in the present life. Khmer culture is currently one of the most popular beliefs today, thanks to its long and sacred history. In addition, their unique architectural features also make an impression on people whenever they visit and thereby become attractive tourist attractions. BestPrice Travel hopes that the lineup above will make your day!

May you be concerned about more discoveries. Let's refer to Best Tour Packages in Cambodia 2022 and start your journey!