Tourists coming to Halong Bay always desire to marvel at all of its stunning sceneries and find their true selves getting away from the bustling urban life. Perhaps choosing a Halong scuba diving or snorkeling experience will be the best idea. From this, you can expect to fully enjoy the peace and come across a bunch of interesting things that have never been seen before. Imagine yourself being surrounded by schools of colourful fish, dancing with octopuses, or walking along the impressive coral reefs. How great the experience is! 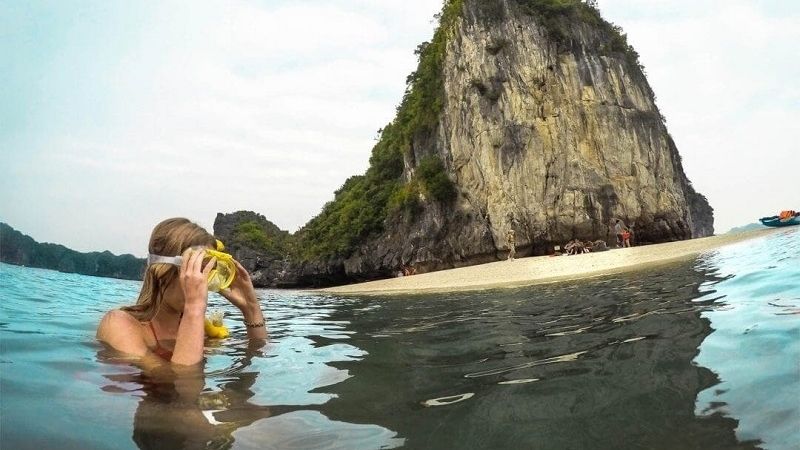 For years, Halong Bay has been listed in the World's Seven Wonders, due to its tremendously diverse ecosystem that is the perfect combination between tropical evergreen and oceanic seashore biosystems. However, tourists coming here only see the half of it that is the conspicuous tropical evergreen made of plants, islands, and caves but miss the equally stunning marine life which is oceanic and seashore. Therefore, scuba diving and snorkelling will be the two ways for you to admire the whole beauty.

Besides, in the sleeping areas of the bay where all of these beauties flourish the most, it can be sometimes hard to cruise or move around by fast boat, because of the group of many tiny islands. In that case, scuba diving and snorkelling will be the best choices to thoroughly enjoy the bay during your trip. The activities are also great for those who prefer calmness without any disturbance of vehicles.

For the oceanic and seashore biosystem, it is blessed with an impressive coral system that covers up to 120 hectares and diversifies with 15 species. Also, the coral system is home to thousands of marine animals such as fishes, crabs, shrimps, etc., which makes underwater life in Halong Bay so colourful that you will regret missing it during your vacation.

The coral is normally found in the areas of Cat Ba island, Cong Do Island, Van Gio Island, and Trai Cave. Halong Snorkeling or scuba diving in these places, travellers explore a breezy life of the marine world with their naked eye and admire a wide coral reef displaying a myriad of colours, marine animals. You will have a closer chance to touch these reefs and dance with cool fish.

Finally, for those who are newbies, taking part in the sports will be a chance for you to challenge your strength, but all of your muscles to the test. After that, you will feel much healthier. During such drinking and eating binge vacation, this kind of exercising is suggested. 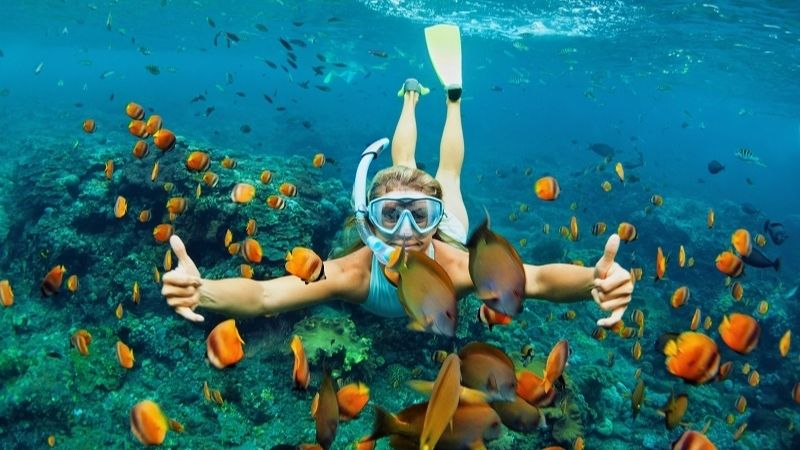 Beautiful snorkeling and diving in Halong

If interested in the activities already, just book a tour, pack your bag, and have fun. But wait, before starting your trip, as the experience depends entirely on the weather, you'd better get to know what the weather is like in Halong Bay and when is the best time to go diving or snorkelling.

Usually, the answer is from May to September (summertime in Halong Bay). This is because of several following reasons. First, during summer in Halong, the temperature is high, makes it too hot to enjoy activities like sightseeing, kayaking, etc. Instead, immersing yourself in cool water is great. You can also sightsee the charming coral reefs underwater. The sunlight will make them even more sparkling and enthralling. Besides summer, autumn is a suitable time to scuba dive and snorkel. However, the natural light during this time is weaker can make marine life less clear to be seen. As this is Halong Bay's peak season, your enjoyment will be disrupted by cruises, boats, and other activities. Therefore, planning to join Halong scuba diving and snorkelling, you should choose summer (from May to September).

Besides, on choosing summer to be the time to scuba dive or snorkel in Halong, you should also take note that storms can set in anytime. To avoid this, you can start your trip in May or September as these are respectively the beginning and the end of the season, hence fewer possibilities of storms. Alternatively, if booking your tour in other months, try to check the weather forecast frequently and ask your travel agency for more information. 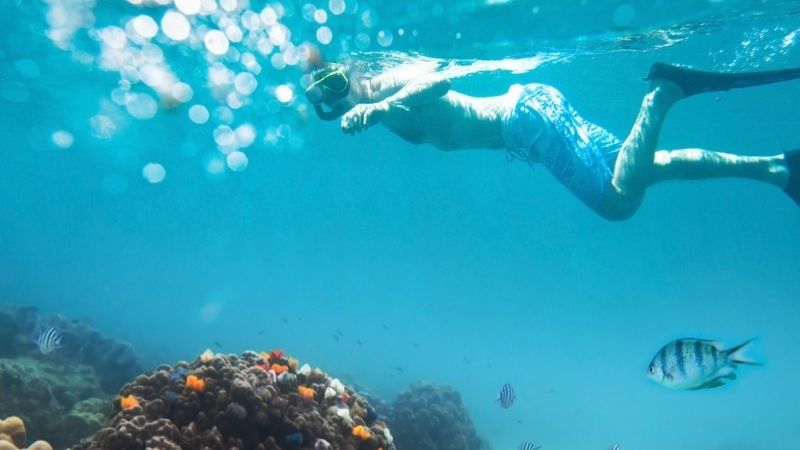 Summer is best time to do snorkelling in Halong

Best places to do diving/snorkeling in Halong Bay

Places for scuba diving and snorkelling are various in Halong Bay as the activities are now popular with tourists. Such places include Cat Ba Island, Lan Ha Bay, Cai Bau Island, to name but a few. Among them, the following can be considered as the best to be referred to when you book Halong Bay tours.

Though known as an extended part of the World Heritage, Lan Ha Bay is more a pristine and untouched paradise in which everything is in its primitive condition and has not been heavily exploited for tourism, unlike the crowded Halong Bay. The bay is home to 400 limestone islets spread over 76 km2, and high diversity of flora and fauna in the sea: about 98 species of plankton, 196 species of marine fish, 177 species of coral….

Besides, Lan Ha Bay is adjacent to Cat Ba Archipelago which is a complex of Cat Ba Island, Cat Ba National Park, Monkey Island, etc., and also features amazingly diverse marine life, especially the precious red coral. As the bay is far smaller than Halong Bay and has lots of islands in it, Lan Ha can give you a private space while enjoying your vacation as well as scuba diving or snorkeling. 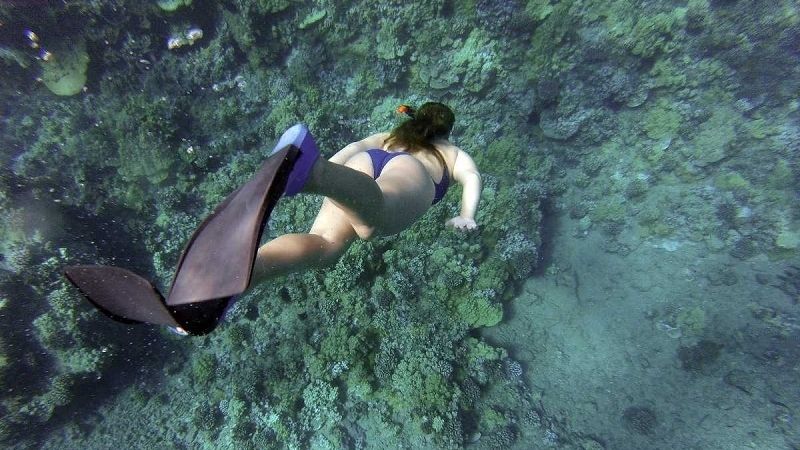 Cong Do Island or "Red Drainage", located in Bai Tu Long Bay, is a small island about 24 square kilometers in size. Like others, it is well-known for the pristine, natural charm, and diversity in flora and fauna. Here, there's an abundance of sea life in an underwater world like shrimp, crab, squid, seaweed, algae, various fish, and underwater vegetation. Besides, the island is also home to 7-kilometre long and 300-meter wide coral reef, making it a must-see place for people who love snorkelling & scuba diving. Besides, as a deserted area of Halong Bay, Cong Do Island has remained its primitive beauty so far and will give you a very different experience while enjoying your stay.

As the island is 23 km from Tuan Chau Harbor, you can take a 2-hour-45-minute cruise to get there or just stay in Halong Bay hotels and take part in scuba diving and snorkeling on a speedboat. However, cruises are recommended as in the island stop many cruises at night, which makes it even more stunning when the moon sets in. Therefore, if you choose a Bai Tu Long overnight cruise, of which the itinerary includes scuba diving or snorkeling, you can also have a chance to admire the amazing nightlife of Halong Bay. 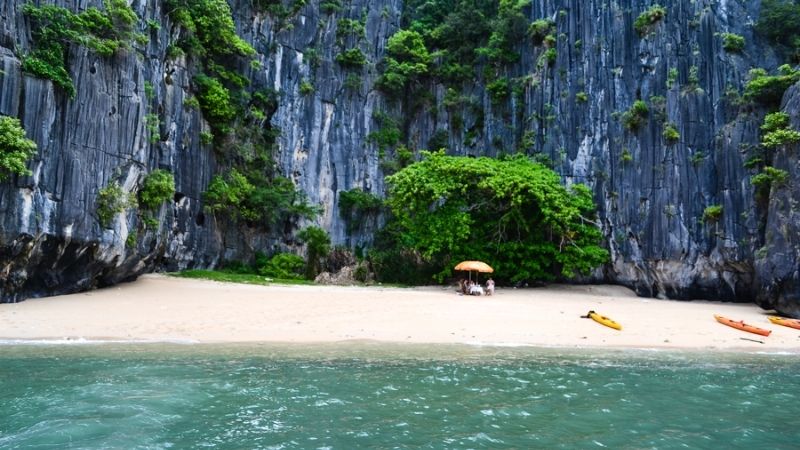 Cong Do Island for snorkelling

Vung Ha is a large island right in the center of Halong Bay. Like the two formers, the island itself is a not-so-popular spot for tourism, thus boasts a pristine beauty and tranquil atmosphere. During your time here, you will have a chance to relax, immerse in the peace, and find your true self after days of just sitting in the office. Besides, Vung Ha Island features diverse marine life with many species of fish, crab, squid, seaweed, and shrimp. The coral reef here is also vivid and colorful, making it an ideal place for scuba diving and snorkeling.

As Vung Ha Island is in Halong Bay Area, you can book a Halong scuba diving and snorkeling service when you want to. Alternatively, cruises are always available for you to choose. Besides, the island is close to Vung Vieng Fishing Village. Therefore, after one or half a day scuba diving or snorkeling, you can drop by to see how the local life is. It will also be another unforgettable experience during your time in Halong Bay.

Halong scuba diving and snorkelling are amazing sports that can help you increase your strength as well as admire the whole beauty of the World Heritage. To dive longer and deeper but still safely and see as many stunning things as you can, careful preparation is needed. Follow these tips and you will never regret them.

Hope that the above information is helpful. Have fun with Halong scuba diving and snorkelling. If you need help to arrange Halong Bay Cruises or tours to any of the beautiful places above, contact us for more detail.

Top 25 Fabulous Things to Do in Halong Bay [Never Miss]

Top 10 Interesting Things to Do in Halong Bay at Night